Well, the engine and transmission are in, sort of! I can't believe how filthy the car was, but it has been sitting for quite a while under a car cover in a carport. Lots to clean, but that is doable.

So, what do I mean by sort of, the throw out bearing didn't fit. Either I have the incorrect clutch fork ball or the wrong throw-out bearing.

Could not find a long throw-out bearing locally, so in went the engine and transmission without the bearing.

Not that big a deal, the main goal was to get the engine installed so I can get the car to Charleston and I can get the body work done. The engine needed to be there so they were sure the hood would work. Once it comes back, it's no more than a throw-out bearing replacement job. Raise the car, pull the transmission, install the correct throw-out bearing, and put it back together. 2-3 hours tops. But at least it is ready for the trip, which was the goal.

We leave in 3 weeks, which gives me time to do some work and clean it up before the trip.

Posts: 568
Joined: Nov 16th, 2009 1:38 am
Tell us about your Corvette: 1971 Coupe that's been in the family since new. Was "stored" in a shed in New England for 22 years. Even though I have limited knowledge and experience, I'm SLOWLY doing a body off restoration. Standby for many questions!
Location: Spokane, WA

What color is the body presently? Looks similar to my '71 Mulsanne Blue...
Top

Actually, the cars present color is fiberglass! Stripped down to bare glass. I would need to get the can of paint out to see what color the firewall was painted.

The paint color in the avatar starts out on the bottom as pearl white, then a few drops of blue added to the pearl and sprayed a little more up, then some more blue, then some more blue, until the top being dark blue. It was amazing, but the car changed color with no place to actually see the place where it changed. It also included double tier lines around the car faded into the paint and a 3D crystal on the center of the hood. This was done with acrylic lacquer back in 1974.

The only major problem was that even John Jamison, who painted it, did not know what shade of blue was anywhere on the car, so it was impossible to do any form of color matching for anything. The whole car would need to be repainted! These are old photos that were scanned, which is why they are not so clear. 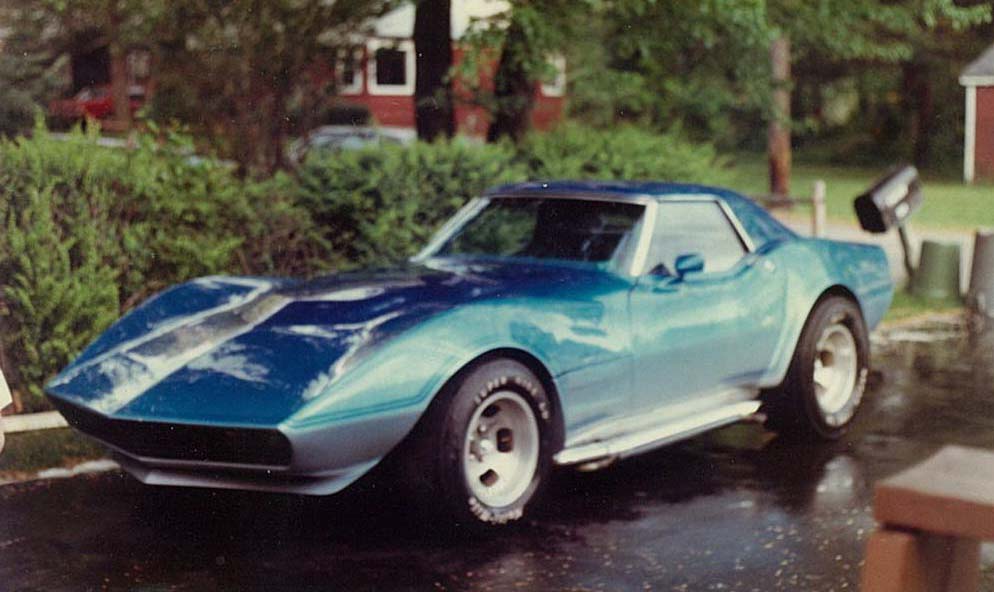 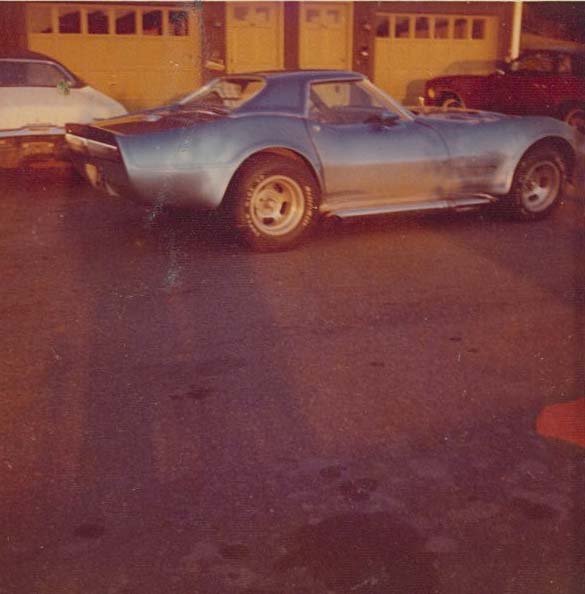 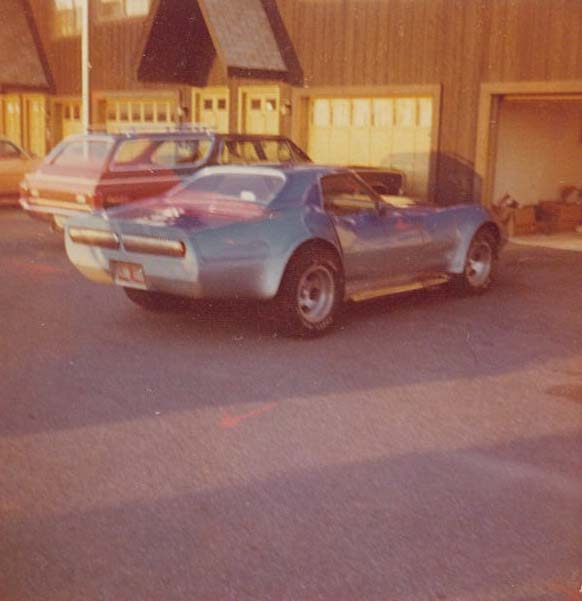 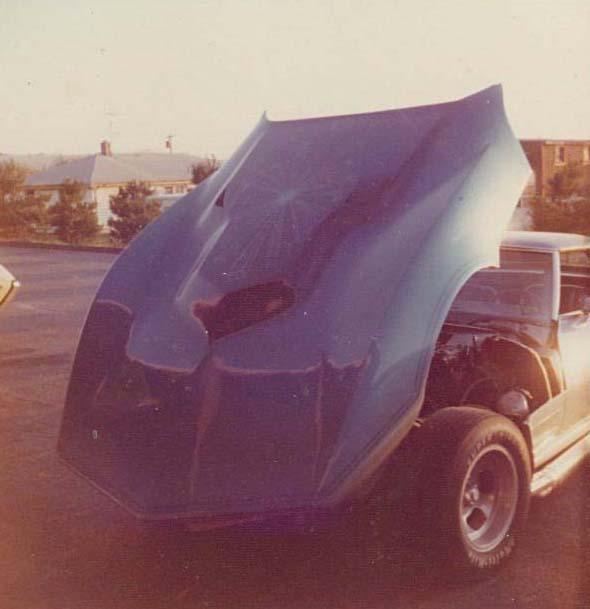 All this paint needed to come off because acrylic paint shrinks as it ages, and eventually had small spiderweb cracks all over the car. The cracks were not in the car, but were in the paint. Essentially, the paint had shrunk enough that the paint became smaller than the car and eventually split.

Would like to try for a similar paint scheme again, but not sure how this can be done with base coat/clear coat paint that is not transparent like the old acrylic lacquers were.

If it can be done, Kerry and John Jamison has done it and can do it again.
Top

Here is an update to the problem I had written about regarding the radiator fan failure.

The new fan from Dewitt arrived quickly and looked great. I went about drilling out the 4 pop rivets DeWitt used to hold the fan to the radiator shroud. Not a difficult job to get the pop rivet heads off, then the fan assembly came right off the radiator.

It was a bit more difficult task to get the river that was left out of the shroud. After cutting off the rivet head, the body of the rivet that was inside the fan housing, about 1/4", still remained, and it was tight!

Had to use a die grinder to remove all of the rivet down to the shroud and then carefully use a punch to drive the remaining part of the rivet out of the hole. Since there was only about 3/8" between the radiator core and the shroud, you can imagine the care that needed to be used not to harm the core. ( I will load the photos I took this afternoon, as I am at work right now)

Once the rivets were out, the task to install the fan seemed simple enough. Line it up with the 4 holes and pop the new rivets in. NOT!

Always something! I tried top put the first rivet in, and it would not fit through the hole in the aluminum shroud. Wait a minute, the same rivet came out, why won't this one go in???

The rivets they sent me were powder coated black, and the powder coating was thick enough to stop it from going into the hole. So I decided to use rivets I had and keep the nice black ones for something else.

The first one went in fine. But when I tried to align the other 3 holes, I couldn't rotate the fan down far enough to line up with the holes. Something was wrong, but I couldn't see it. So I decided to drill out that rivet and investigate.

AW SHIT, I try drilling out the rivet and I could not make any headway! Then I realized I picked up the wrong rivet box, and found I had used a stainless steel rivet instead of an aluminum one. An hour later and the rivet was again out.

I then tried to align the fan with the holes and saw the problem. It turns out the bottom of the fan shroud was hitting the sway bar and it would not allow the fan to go down far enough to line up with the holes. That explains why the fan failed!

When I bought the radiator, the fan was already mounted on the radiator. The weight of the whole assembly was enough to bend the plastic outer shroud enough to put the radiator in, even though it was in contact with the sway bar. It bent the outer shroud housing enough that it was making contact with the rotor. Since the fan blades were made with a plastic ring around the outside, I couldn't hear or tell it was rubbing, and I assume after a while, it put enough stress on the motor, it overheated and froze.

So, I find I need to drop the sway bar about a 1/4 of an inch. I went over the talk to Danny at Van Steel about dropping the sway bar and he said no problem, but doing so will interfere with the brackets if I should ever want to install the front bumpers. He did say I could cut a small indent in the bracket should this become necessary.

We then discussed my sway bar. The smallest diameter sway bar he sells is 1”, and also has 1.1/8”, 1.1/4” and 1.3/8” diameter bars. The stock bar is 3/4". Increasing the diameter of my bar will add to the issue, but in my opinion, the added benefits of the larger sway bar compared to just shimming the bar down was an easy choice. He said if I am not doing heavy Autocross, the 1” bar will be more than enough and will show a drastic handling improvement over the stock little bar. Also, his sway bar kits come with new mounting brackets and bushings, but his have a grease fitting on the bracket to make it possible to lubricate the sway bar where it rotates in the bushing.

So, the new radiator fan is now installed WITH ALUMINUM RIVETS, and I have a new 1” sway bar with new bushings ready to go in.

Once again, thumbs up to DeWitt's for standing behind their product so well!
Top

Posts: 568
Joined: Nov 16th, 2009 1:38 am
Tell us about your Corvette: 1971 Coupe that's been in the family since new. Was "stored" in a shed in New England for 22 years. Even though I have limited knowledge and experience, I'm SLOWLY doing a body off restoration. Standby for many questions!
Location: Spokane, WA

Glad DeWitt's came through for you and that you figured out the cause of the failure.

Must be nice to be so close to Van Steel that you can just stop in to chat!

Yes it really is. After I got the old sway bar off, I compared the two, and the new one looks massive compared to the old stock one. I also did not see a dip in the old one like Danny said there should be. The new one has a definite dip. Took the old one over to Van steel and showed it to Danny and he said it was just worn out. Sorry I didn't get a photo of it, but here is the new one. 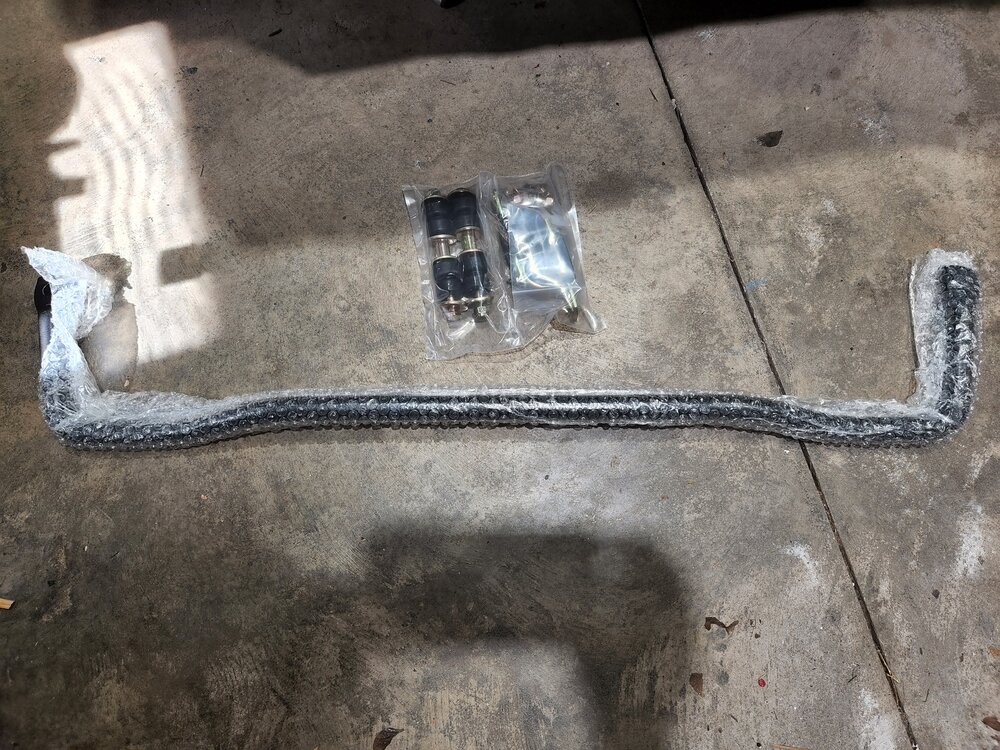 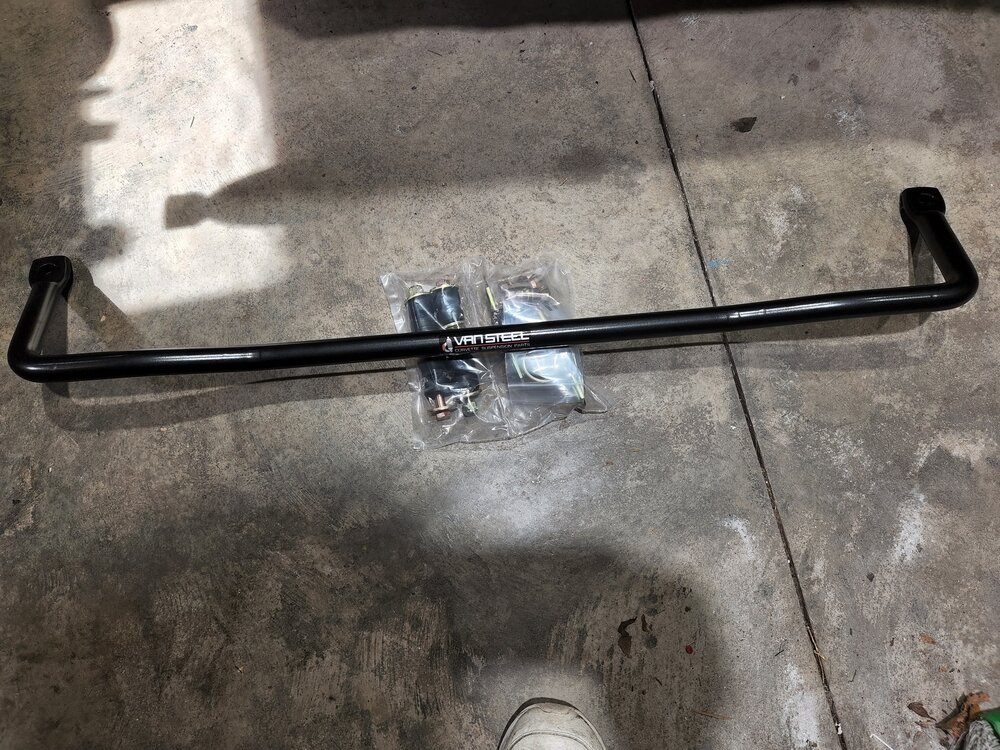 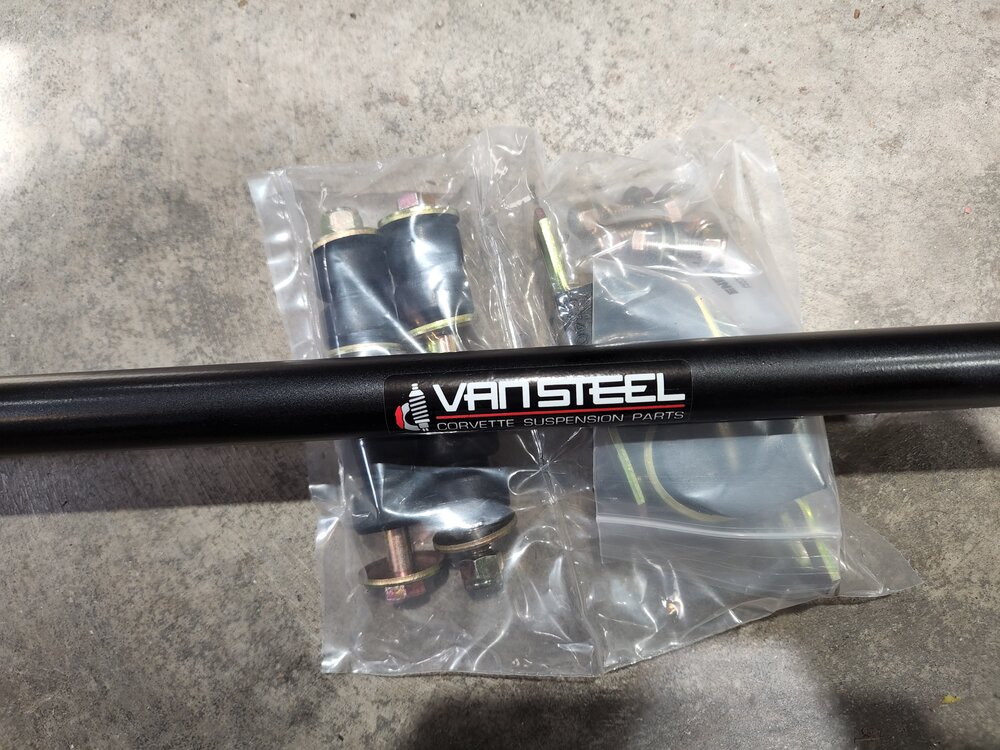 Also, Danny installs a grease fitting in the retainer cap, as the sway bar rotates and needs lubricated. The factory ones do not have this feature. 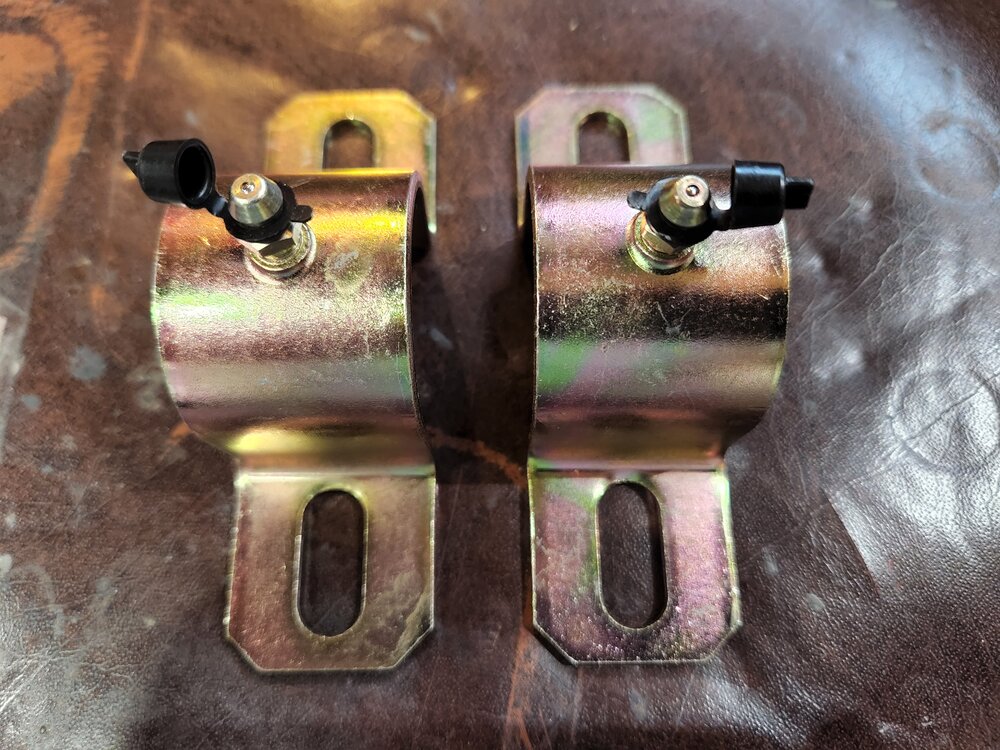 The new sway bar does not even come close to hitting the fan, where the old one would have needed spacers. More photos tomorrow when I am finished installing it.
Top
Post Reply
1166 posts

Users browsing this forum: No registered users and 2 guests