Posts: 552
Joined: Nov 16th, 2009 1:38 am
Tell us about your Corvette: 1971 Coupe that's been in the family since new. Was "stored" in a shed in New England for 22 years. Even though I have limited knowledge and experience, I'm SLOWLY doing a body off restoration. Standby for many questions!
Location: Spokane, WA

That was a stroke of luck! I don't believe there are any corvette experts like that near me. The caliber of my resto will be nowhere near your resto-mod and I'm not sure I'm that worried about it. I'd just like to see mine in somewhat of a drivable condition before I croak!

Yesterday found both door panels installed and Sergio made them fitting perfectly! 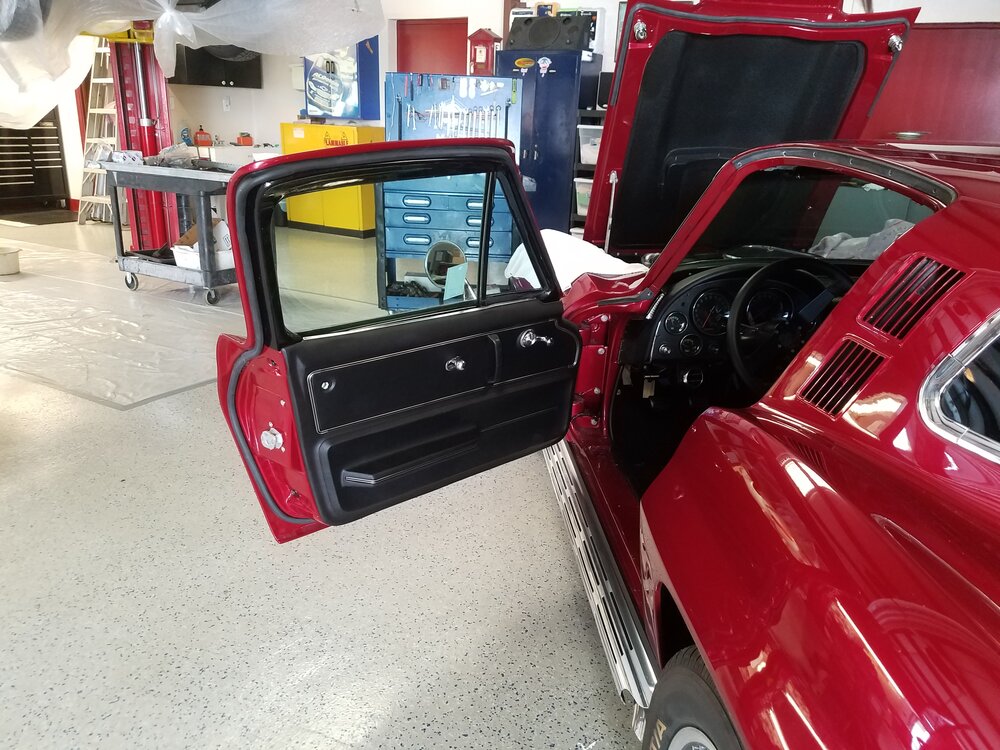 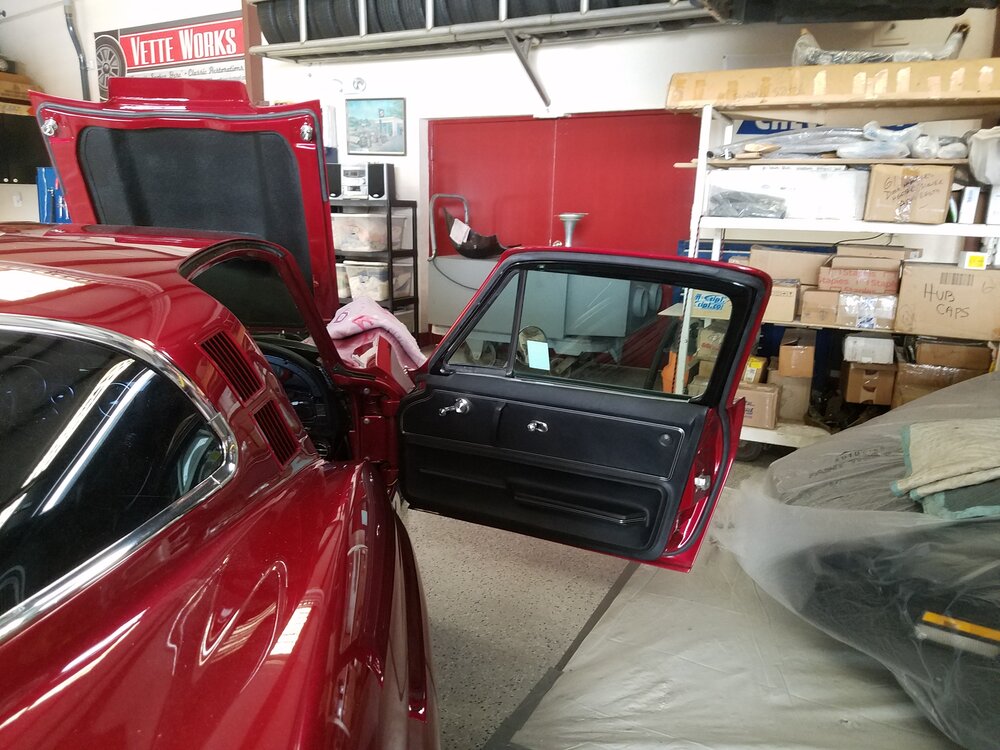 The vent window operator shafts turned out to be correct, so that was a relief!

The only part I was missing was the 2 door lock knobs. I looked at my parts list in my computer and realized I had never ordered them.

I wanted to maybe use the ones from the 1967 year as I liked the looks of them better, but because they were mounted slightly more forward in the door panel than the '65, Sergio was worried they may have a longer shaft and may stick out a little farther in the door panel. Trusting his experience, I decided to stay with the '65 knobs.

Next came the wipers. When Sergio examined the ones I bought from Zip Corvette he found 2 problems. The first was that Zip sold cheap Chinese knock-offs that were not adjustable like the original Corvette wiper arms are.

They were cheaper, but without the adjustment screw to position the wiper blades correctly, they would have the blades rubbing the stainless steel windshield molding and eventually destroy the polished finish on the moldings. The spacing of the blades is so tight there is no room for alignment error. 90% of the time either they would hit the moldings or the blades would hit each other. Simply moving one of the wiper arms one notch in the spines is not always good enough to correct for this, and I saw this while he was aligning the wipers on the green '65 last week. Chevrolet did not make them adjustable for the hell of it, they knew this would be an issue between individual cars and that was why they made the arms adjustable so they could fit each individual Corvette.

The photo below shows the ones Zip had sold me and the one below that shows the correct ones. 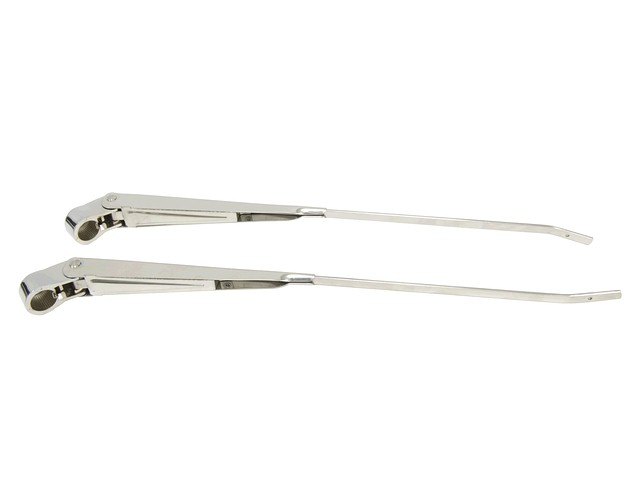 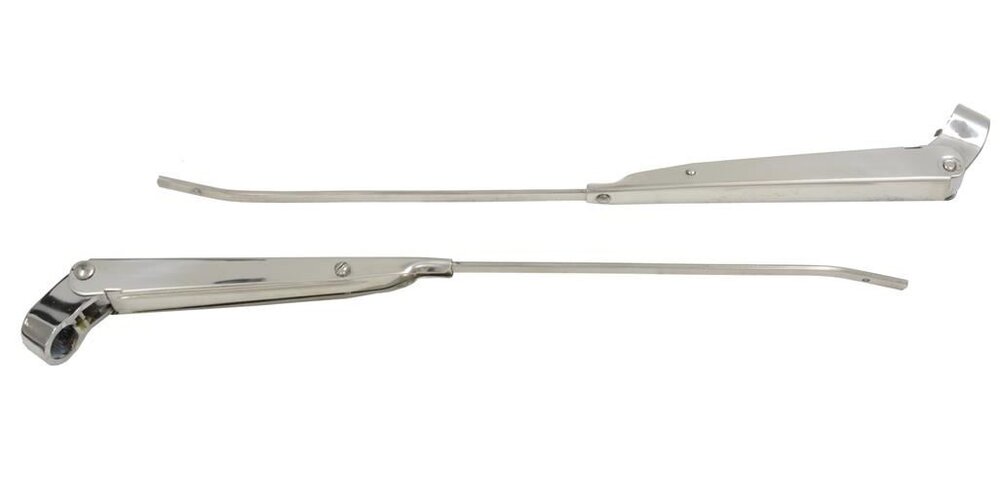 The second issue was the wiper blades themselves. He showed me that they were 1 inch longer than the correct ones, which means that even if they were adjusted correctly, they would be rubbing across the stainless steel windshield moldings again destroy the finish on the moldings. Zip listed as fitting 1963-1967 Corvettes, but when we looked on line at other places, they made wiper blades for 1963-1965 Early (16") and a different blade for 1965 Late - 1967 (15").

So, Zip Corvettes, one size does not fit all.

Corvette Central had some of the correct wiper arms, but they were $200/pair plus tax and shipping ... without the blades and rubber inserts. Had to buy them extra.

It turns out, Sergio had a used set of the correct arms with blades in excellent condition in his shop that came off the green '65 which the owner had replaced with new. The ones that came off were correct, but did not have the correct manufacturer's engravings specific to original required arms, so he replaced them with the correct parts because NCRS would be looking for the engravings in the arms. I don't even want to know what he had to pay for the NCRS correct arms!

Sergio contacted the owner and I was able to buy them for $200 with the correct length blades. All I needed to get were new rubber inserts as the ones that were on the arms were worn out, cracked and hard.

Should be able to bring the car home tomorrow, but we also have a 80% chance of heave thunderstorms which may again water soak my alley access.

Great guy and great shop. NYC loss is Florida's gain. Sergio did all the weather rubber on my 82 Collector Edition and adjusted the rear hatch. Results = LIKE NEW. All the best in Florida
Top

When we tried to install the wiper arms, they went on fine ... but ... the previous owner, apparently not knowing how to remove the arms, pried and twisted them off and totally destroyed the aluminum splines on the wiper transmission shaft. The new arms go on, but the shaft spins inside the arms without moving the arms.

And wouldn't you know it ... this is another part that is not in production anywhere and only available by finding a good one on a junkyard Vette.

Well, both Sergio and I searched the internet for almost a full day, then he found what is said to be a real nice pair of wiper transmissions through one of his contacts in NCRS. The seller said he wanted $75 each plus about $25 or so in shipping. Lucky we found any at all. You can find replacement transmissions and they even make repair kits for C1, C3 and C4, but nothing for C2 Corvettes.

I immediately said yes and hopefully they will be on their way. But, it does mean removing the instrument panel again to get to the drivers side wiper transmissions.

Now I know how great a deal Sergio found. Yesterday, while I was in his car with him after dropping some caliper cores off at Van Steel Corvettes, another seller Sergio had called and said he also had 2 good transmissions available ... for $250 per side!

This is the crap that happens when a part is no available any longer.

Sure did pay to shop around.

Tomorrow is our Corvette Club's annual Corvette show and as much as I wanted to show the '65, it is not ready because of the wipers, headliner and glove box. But the C5 is ready and looking good!

Should be a fun day of relaxing and seeing lots of great cars. Just hope the rain holds off.

Today was our Corvette Club's annual Corvette show. This year it was open to all Corvettes and other makes and models of cars and trucks, in an attempt to have more entries for people to see. Corvettes competed against Corvettes and everyone else competed against everyone else. It was a relaxing day and did show a lot of awesome cars, which was not bad at all seeing the areas to both the South and to the North were raining like crazy. All we had was a misty overcast with no actual rain all day on the show. The overcast did lower the temps and provided a nice breeze.

There were 138 entries, over 2/3 of them Corvettes. The Vettes were in one part of the parking lot and the other cars and trucks were in the other part of the lot. I couldn't post all the photos, so I posted some of the Corvettes, as this is a Corvette Forum. 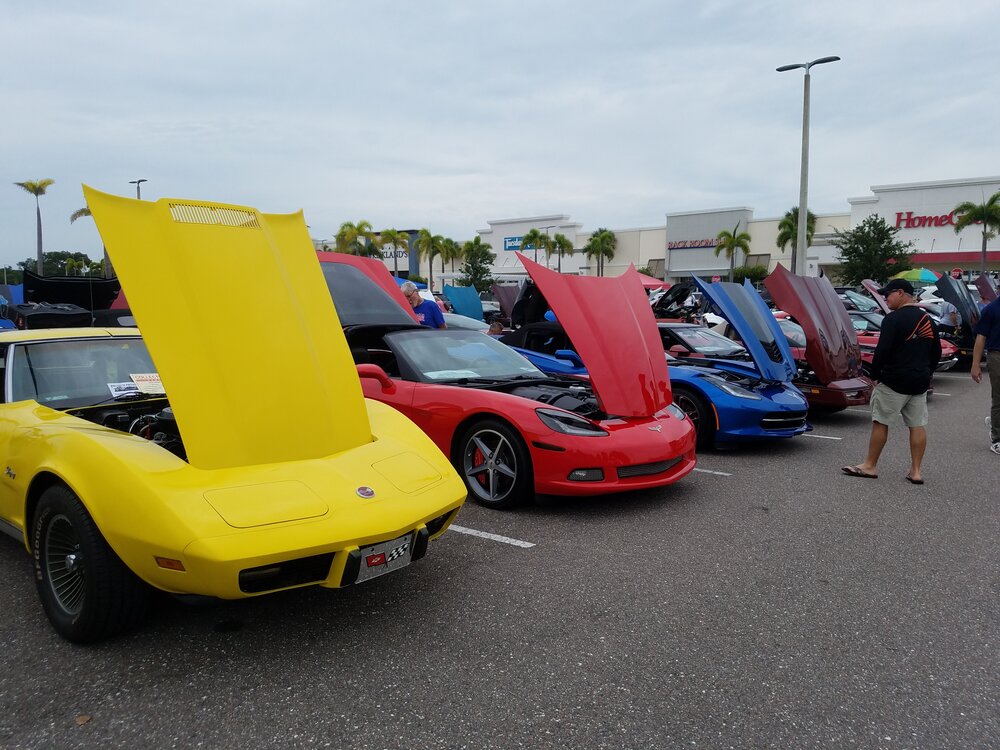 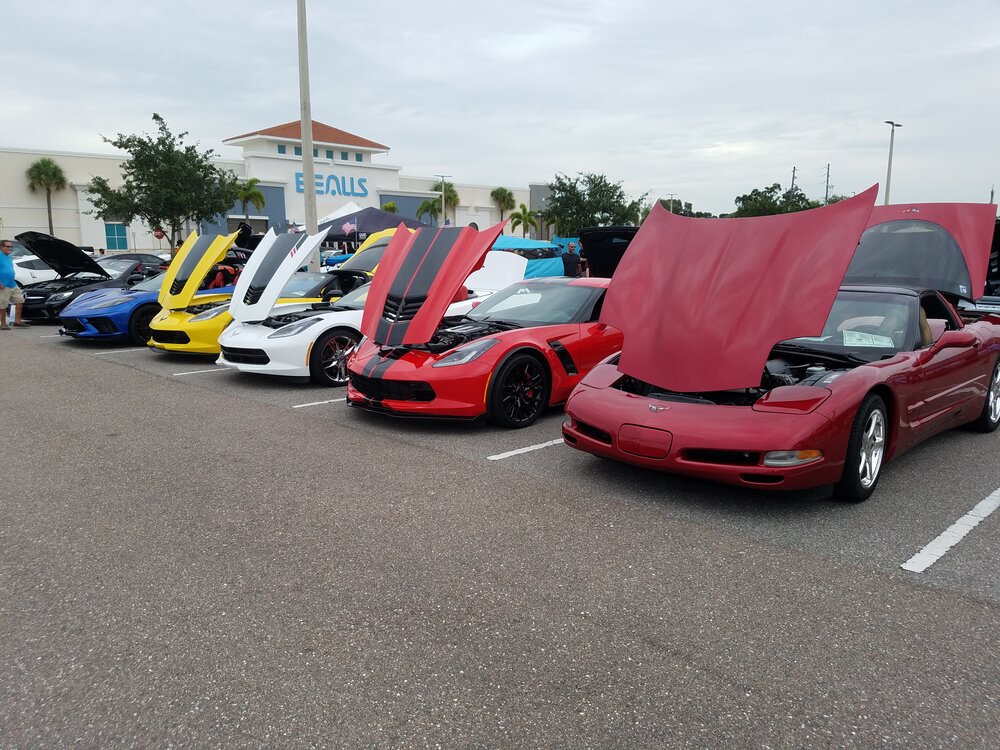 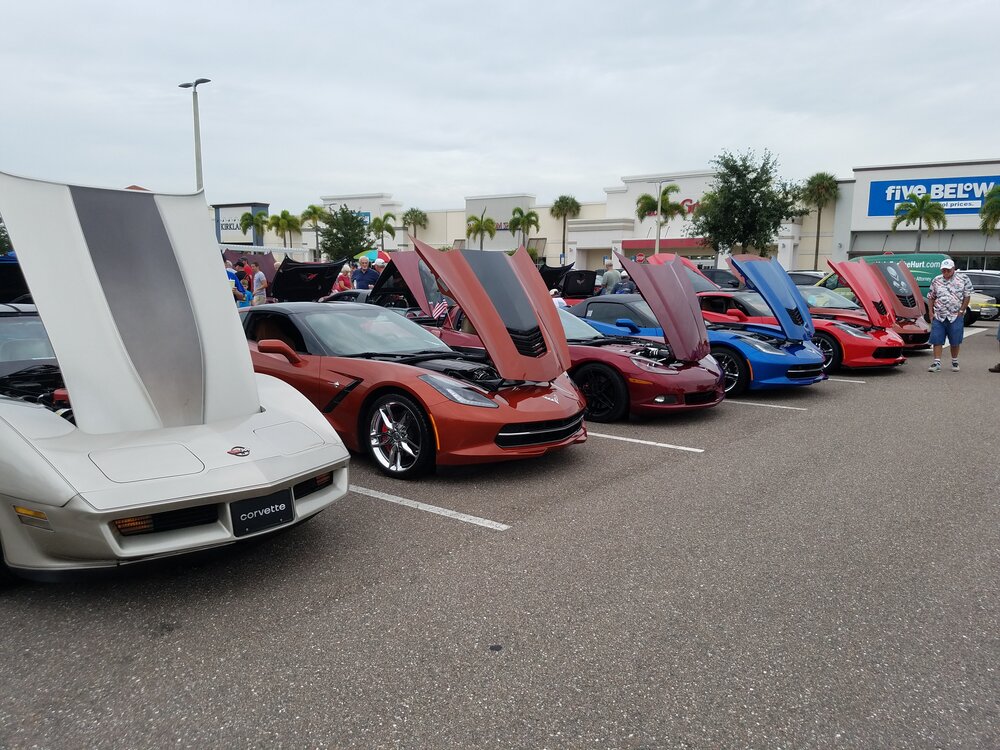 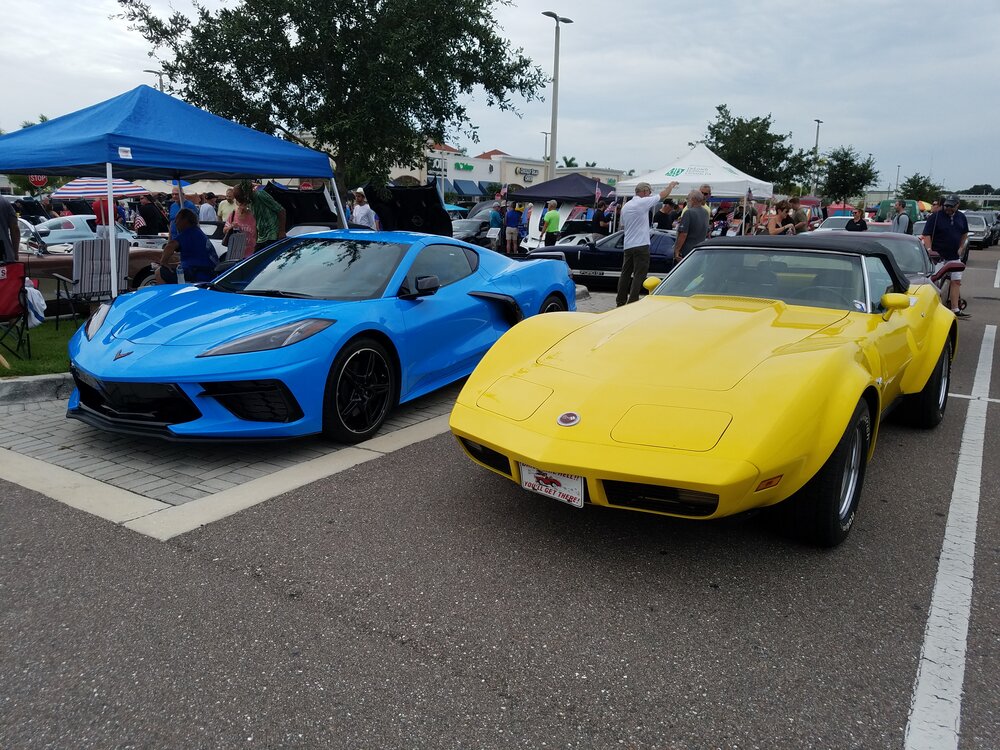 Lots of C1 and C2 Corvettes which was unusual to have that many of the early ones. I was surprised that more C3's were not there. 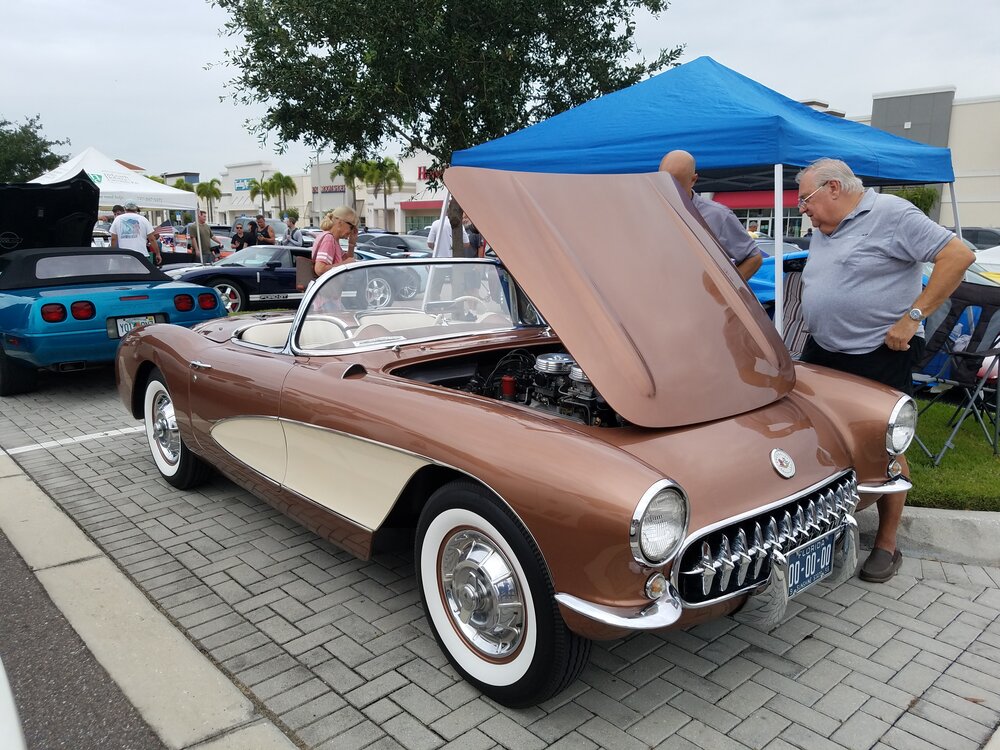 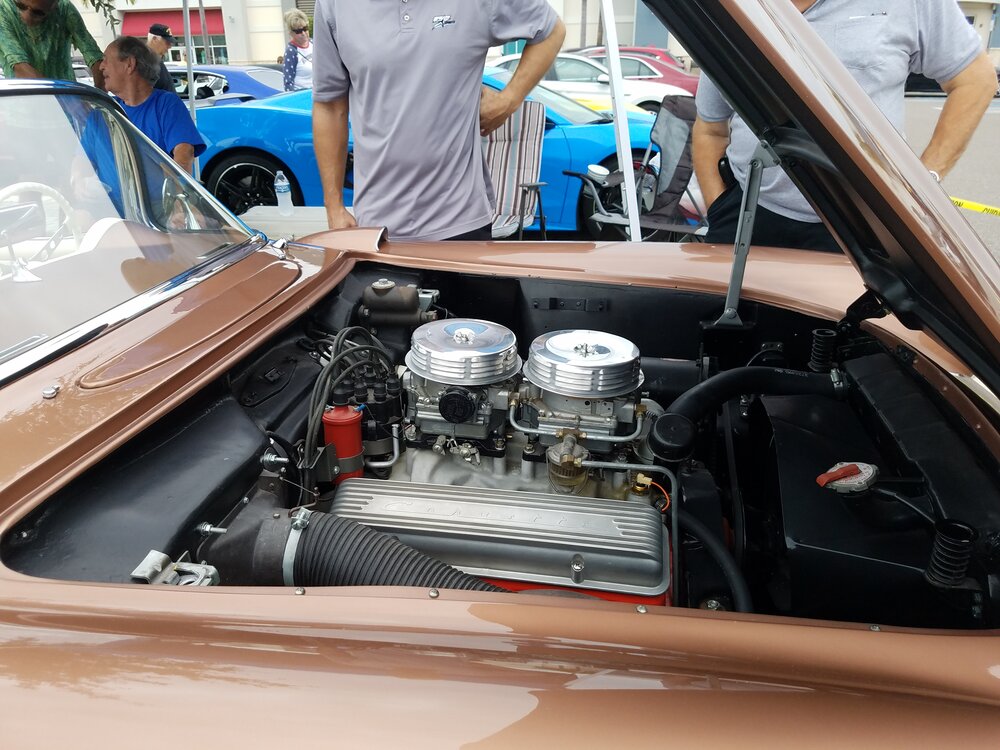 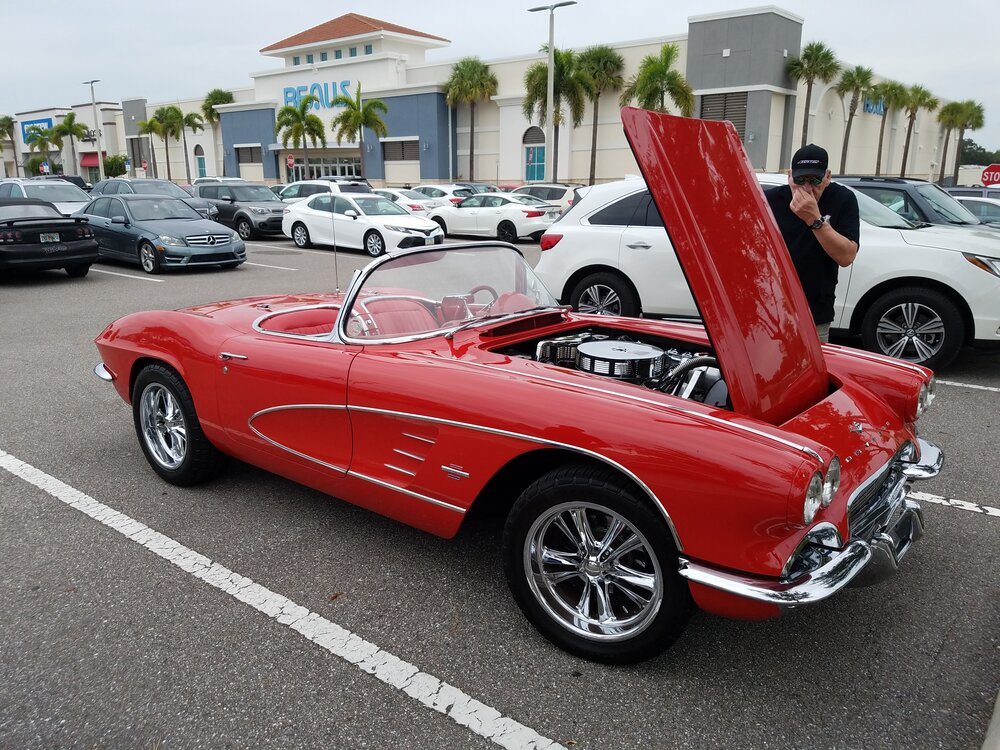 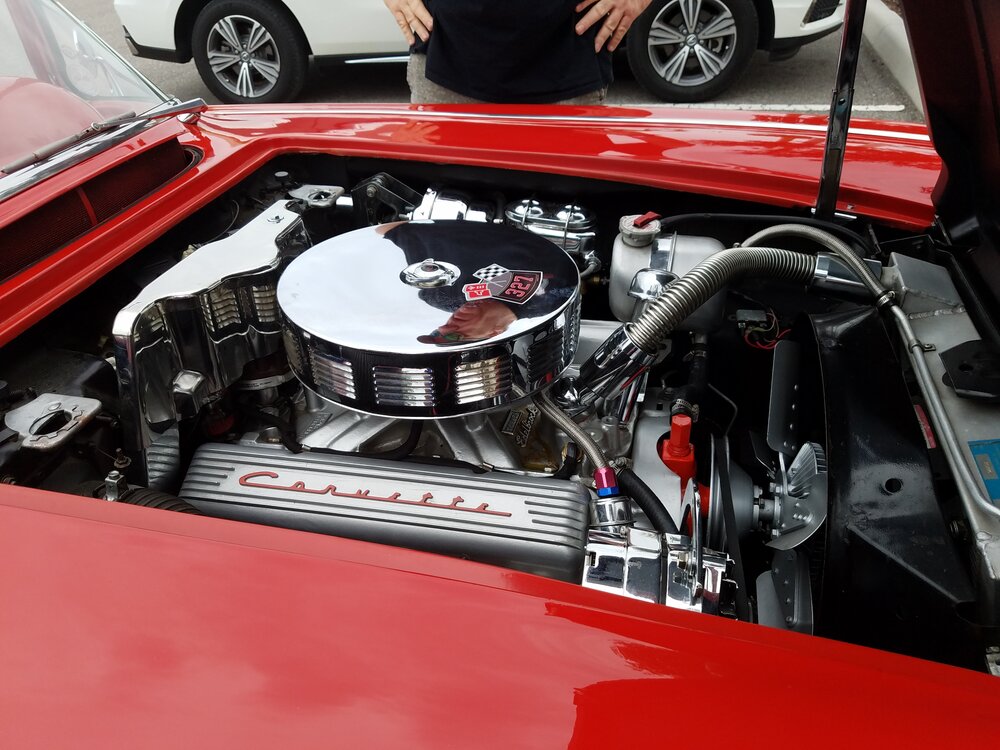 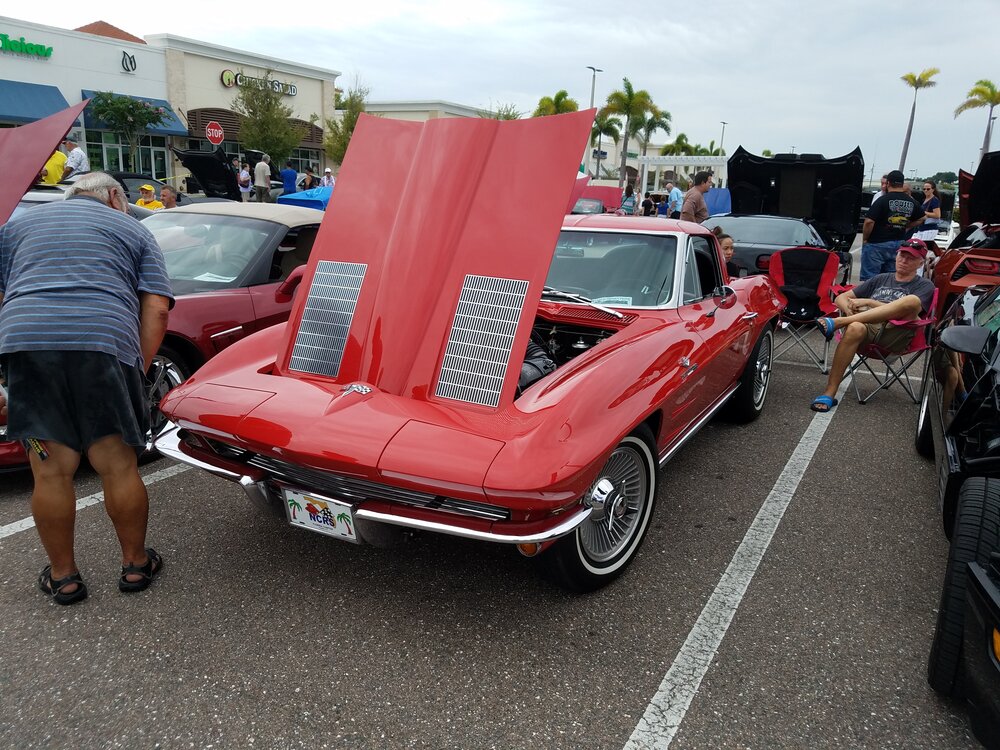 Sergio from Vette Works, the shop that installed the windows in my '65 doors, brought 4 Corvettes. 2 were his and 2 were his customers. This is one of Sergio's customer's Corvettes that he restored. Notice the New York plates. 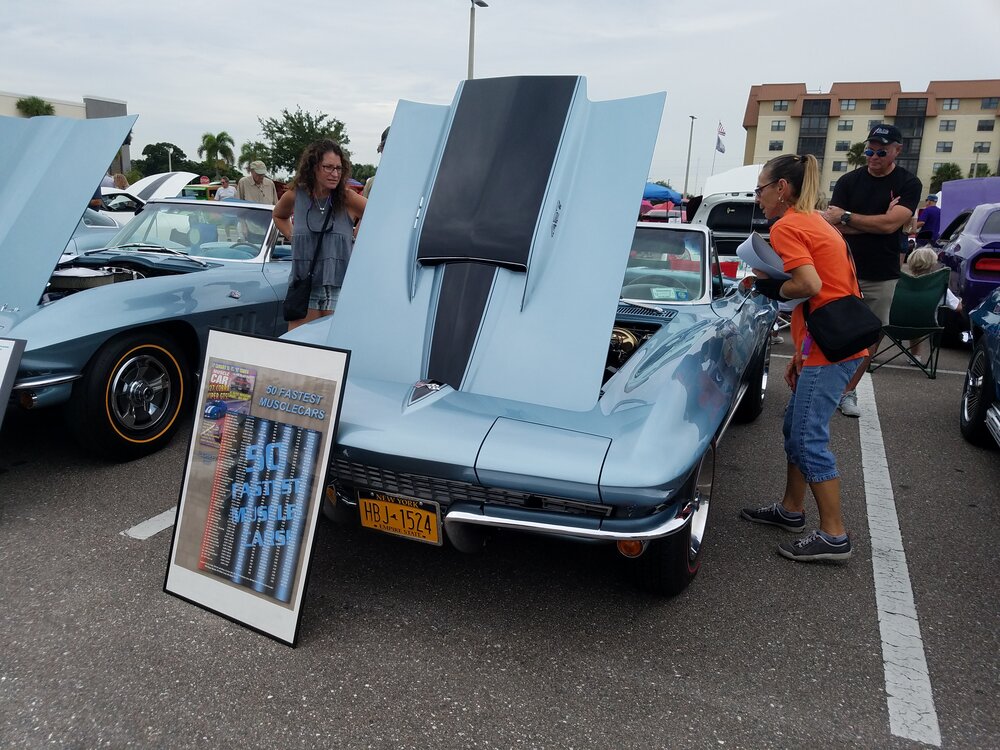 The convertible is Sergio's Corvette and the coupe is his wife's Corvette. Zoom in and read the poster for the history of these two extremely unique cars. 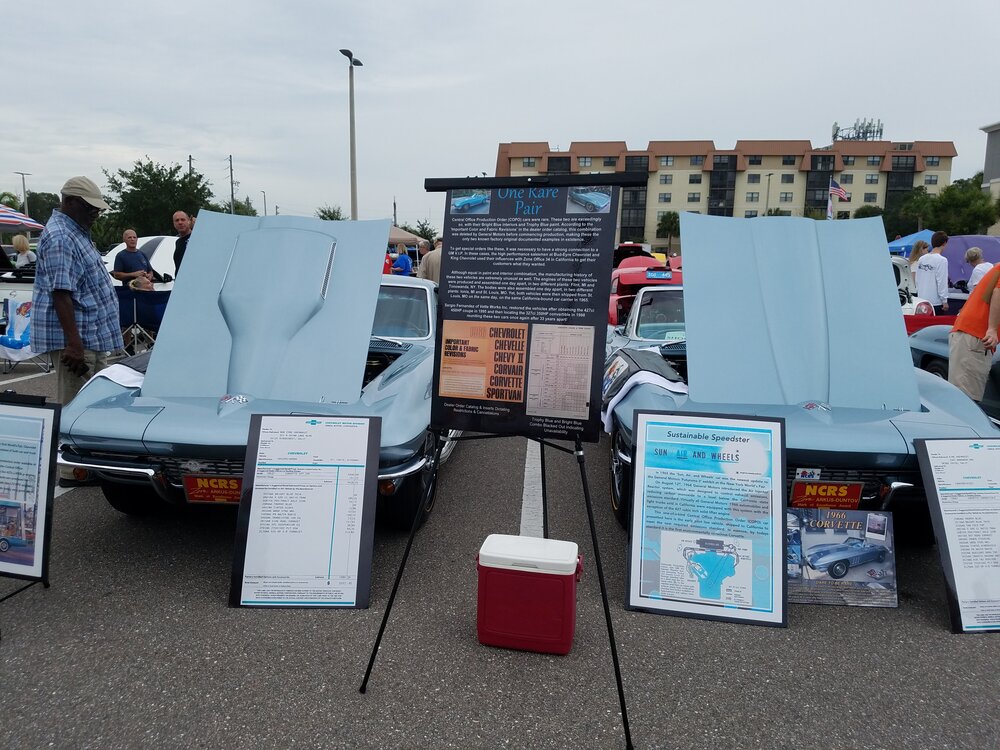 This is another of Sergio's restorations. It was purchased by the current owner from drag racer Grumpy Jenkins grandson. It once belonged to his grandfather Grump Jenkins. 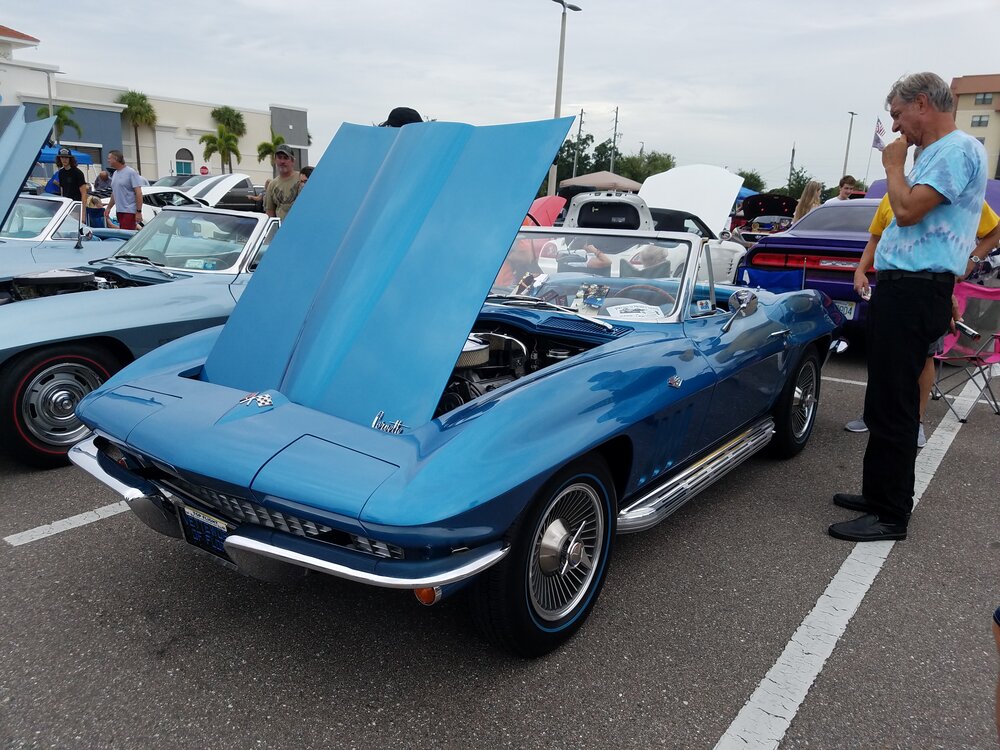 All 4 of Sergio's Corvettes won trophies, with Sergio's wife beating out all of the others by winning Corvette Overall Best of Show!

One of the sponsors of our show was an organization called Dream Give-A-Way. They obtain and restore old cars and raffle them off for charity. This year, among the other cars they are raffling, are a pair of Corvettes, one being a full Resto-mod 1961 Corvette with an LS-3 powerplant pumping out 525 horses and a new C8 Corvette built by Lingenfelter Performance Engineering, with a 700+ hp power plant. The winner gets BOTH Corvettes plus cash for taxes! Check out their web site for details on this package and the many others that are also being offered. 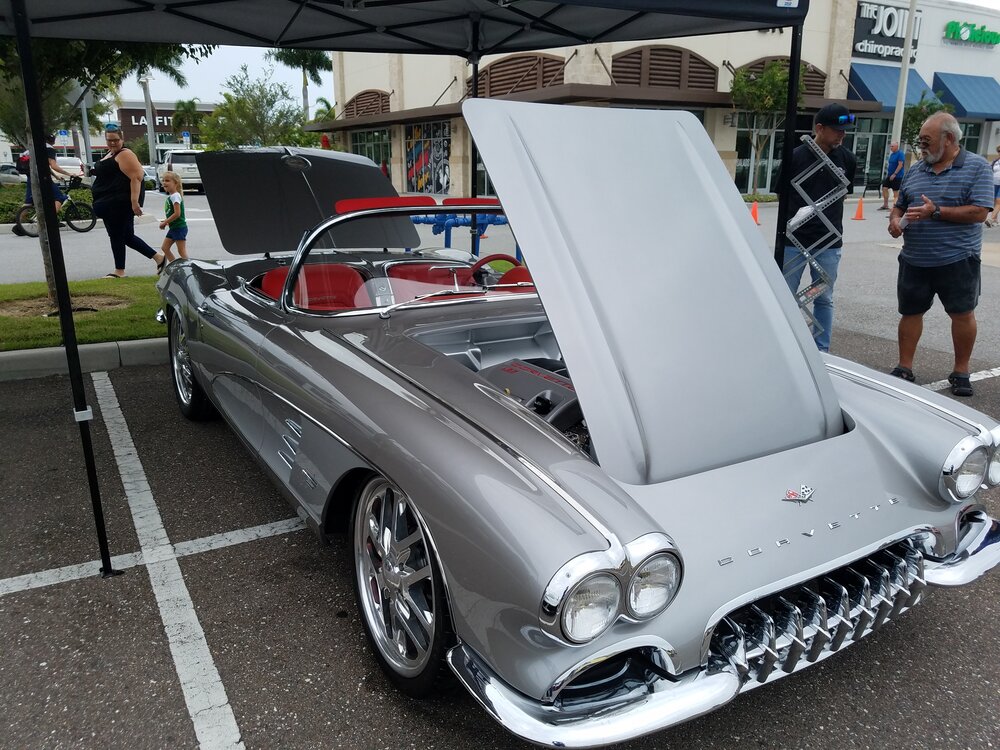 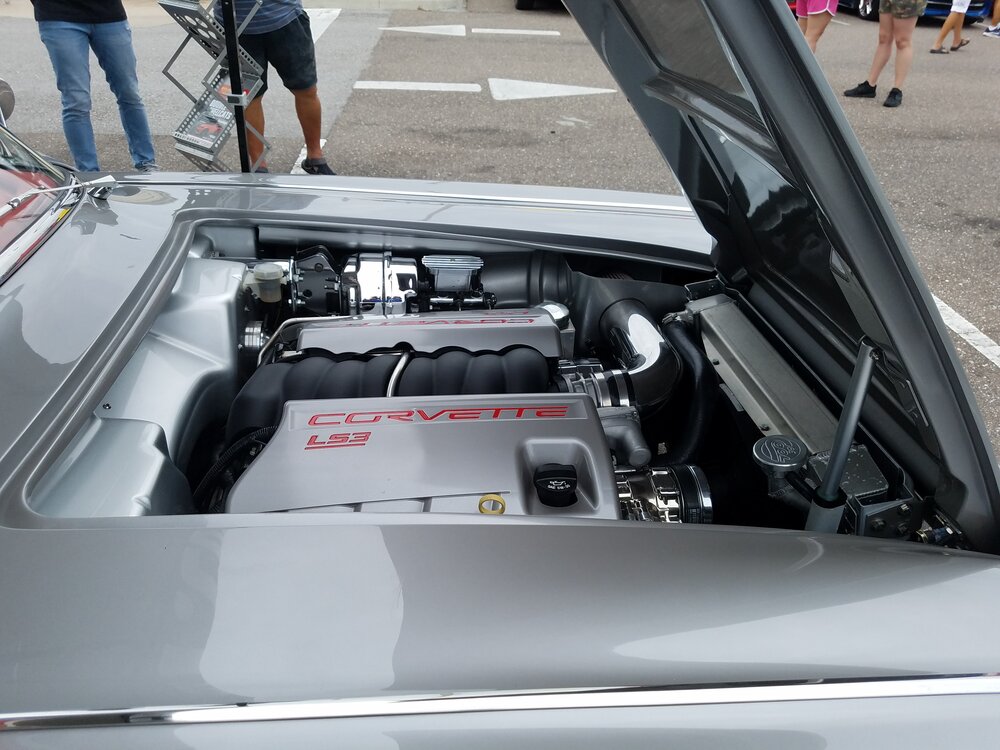 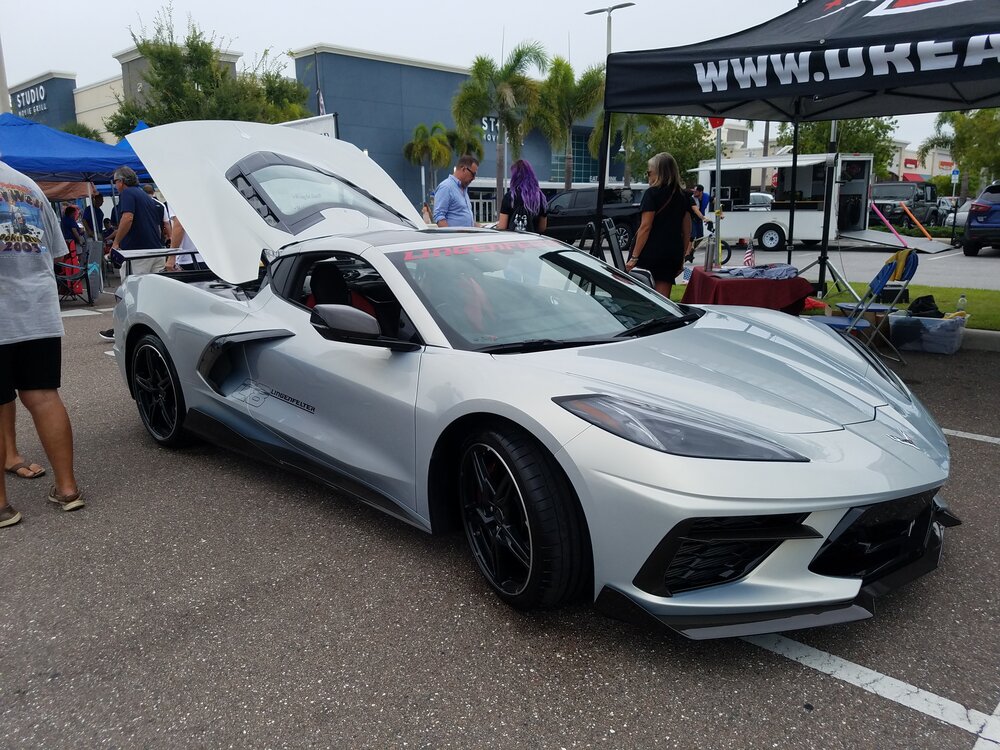 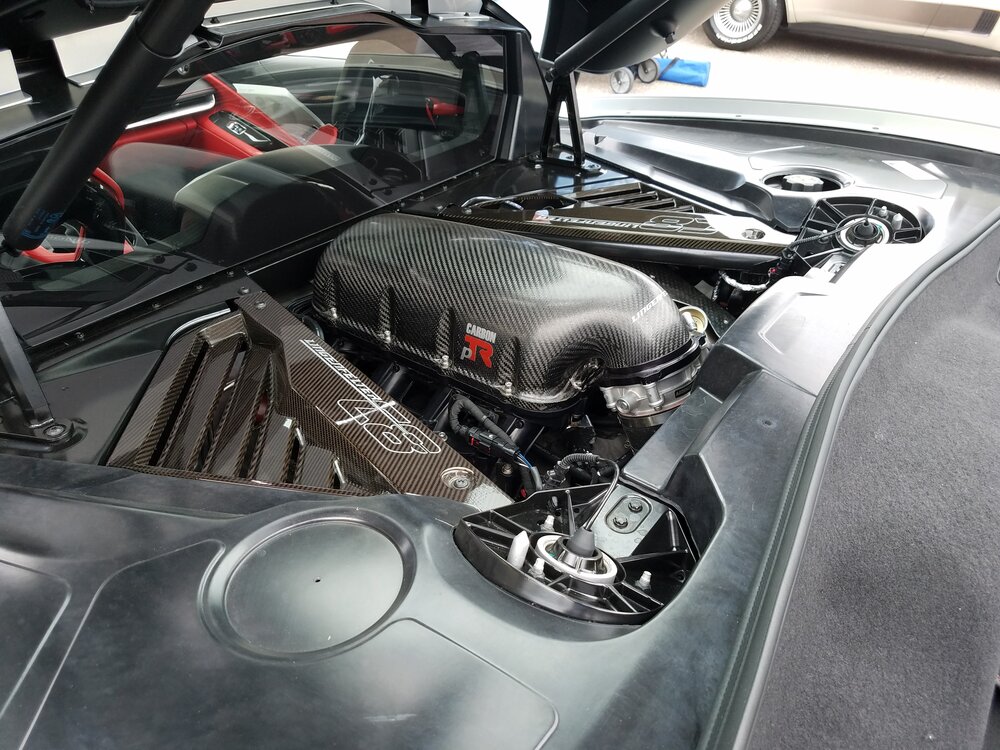 Dream Car Give-A-Way is actually located right here in St. Petersburg and our club is almost always invited to the actual give-a-ways. We get to see these cars and actually meet the winners.


My 2001 Magnetic Red Corvette drew a lot of attention and I did win a trophy for best in C5 class. Not bad for a 20 year old Vette that lives in my driveway under a car cover year round! Yes, it still takes a lot of work getting it ready for a show, but it's worth it. I think there are more miles on my Meguire's DA buffer than on the Corvette itself. 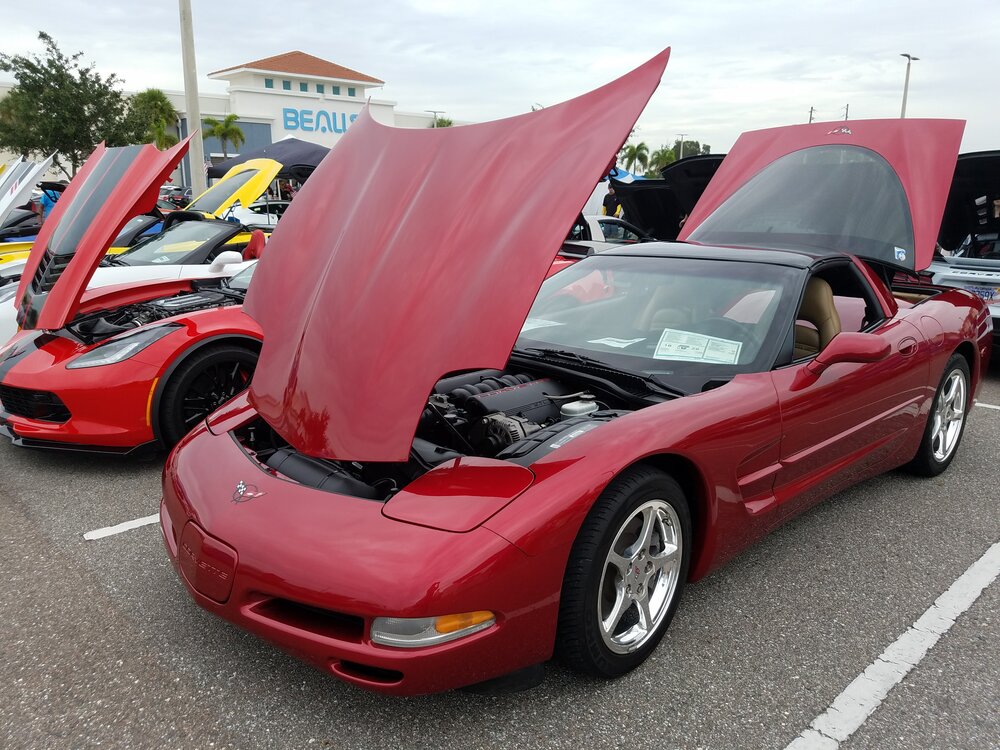 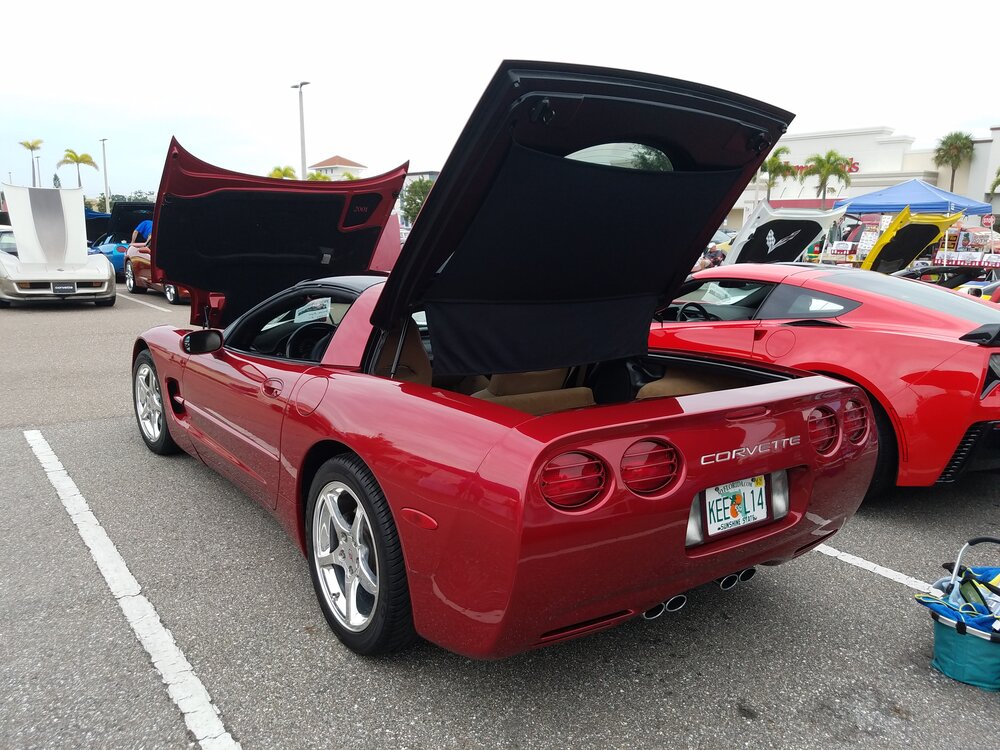 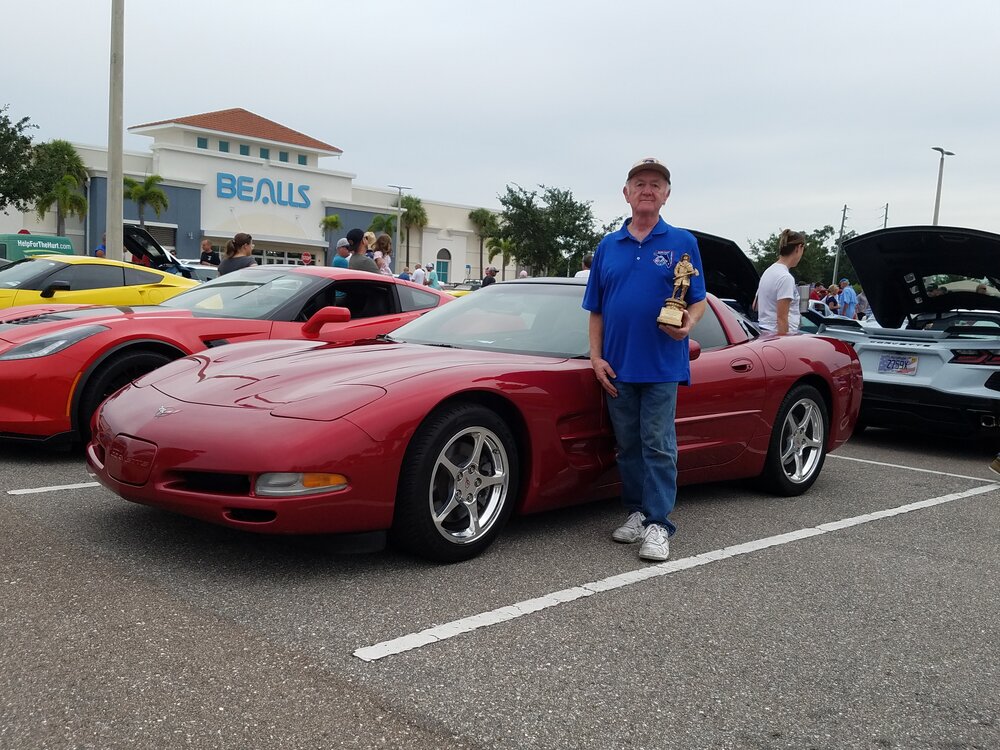 Since the show was on 9-11, the trophies were designed to commemorate rescue efforts after the attacks on 9-11-2001. 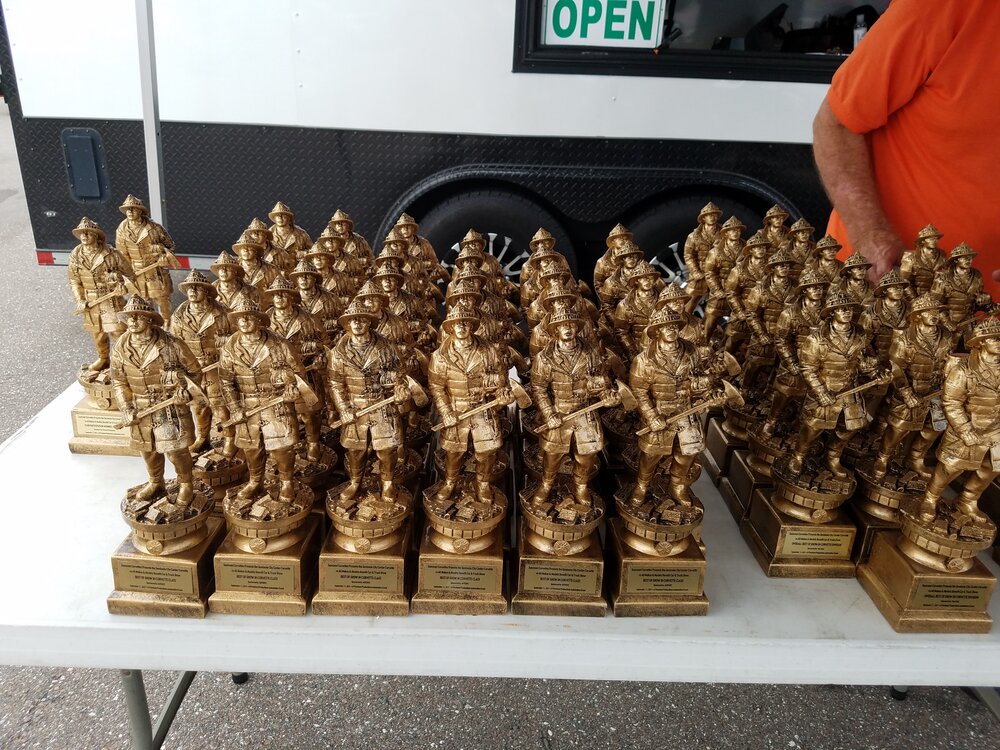 The best part of car shows is not the trophy, but seeing all the other cars and meeting friends. Hope there are shows in your areas and you go to them, even if you do not participate. Hoping the '65 will be in the next one along side the 2001. Then I start finishing the 1968!

The wiper posts arrived and I now have wipers. Vetteworks installed the passenger side wiper transmission and I need to install the drivers side soon, as I may need to remove the instrument panel to do that, but not today. Brought the car home last Tuesday to install the headliner and glove box. Looks good in the garage! 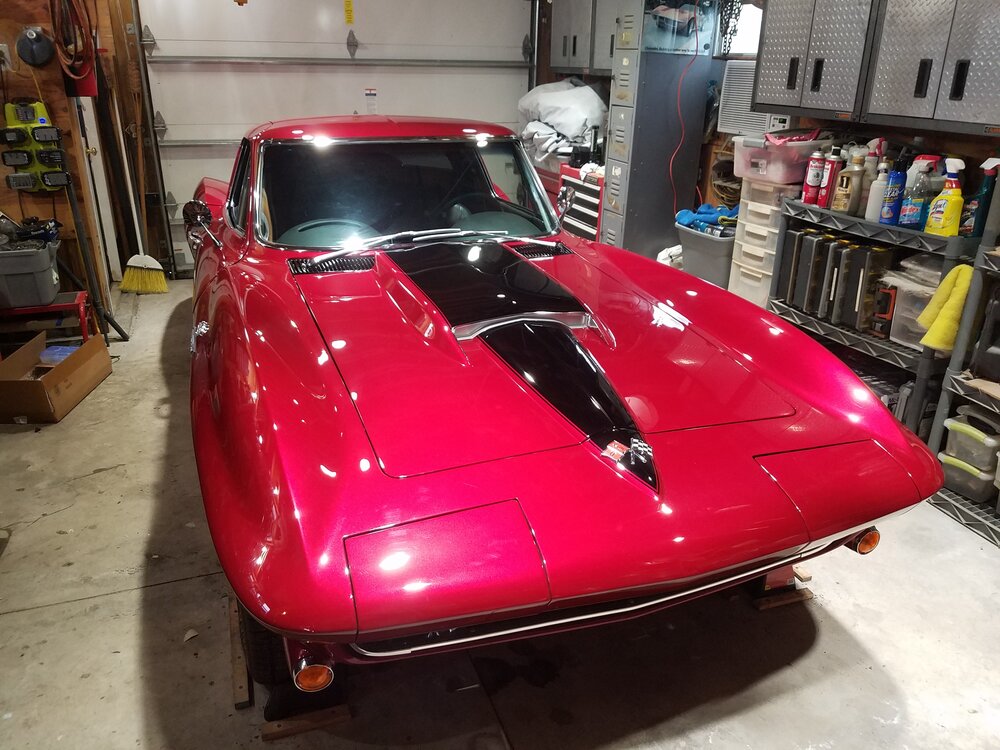 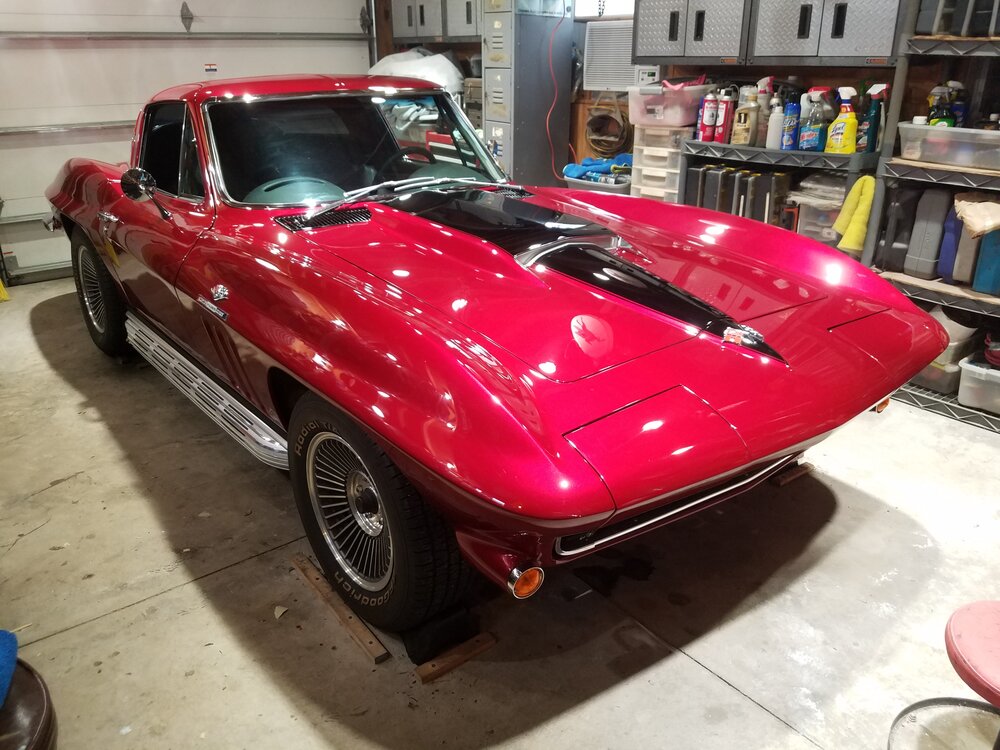 Posts: 552
Joined: Nov 16th, 2009 1:38 am
Tell us about your Corvette: 1971 Coupe that's been in the family since new. Was "stored" in a shed in New England for 22 years. Even though I have limited knowledge and experience, I'm SLOWLY doing a body off restoration. Standby for many questions!
Location: Spokane, WA

YES IT MOST CERTAINLY DOES...
Top

Users browsing this forum: No registered users and 5 guests