I thought that you found it in your pile of parts a while back. I saw a couple of them at Carlisle last year....along with lots of junk.There was lots of c2 parts last year.
I completely forgot about Lakeland until yesterday.
Top

a66toy wrote: ↑
Feb 24th, 2020 12:05 pm
I thought that you found it in your pile of parts a while back. I saw a couple of them at Carlisle last year....along with lots of junk.There was lots of c2 parts last year.
I completely forgot about Lakeland until yesterday.

I thought I had one also, but it was not for a Corvette, at least not a C2 Corvette. Had the right shape, but the angles were slightly different, just enough to where it would not work and could not be bent. Was getting really discouraged until BAM, right out of the blue, one showed up. I tried it on my window frame and it works.

Some of our Corvette Club members did brave the really cold day over at the Lakeland Swap Meet. Was not so much the cold as the wind. I understand it felt like the low 40's with a 30 mph wind. Can't say myself, since I didn't need anything I did not brave the weather. I heard there were a lot of Corvette parts, but not much in C2 parts.
Top

rbryce1 wrote: ↑
Feb 14th, 2020 11:39 pm
The engine has me a bit concerned though. It really ran like crap when I was there today. I have been noticing it going down hill over the last month or so. Hard to start, missing and popping on the passenger side exhaust. To me, it all sounds like fouled spark plugs. I looked in the maintenance records and they are not the original plugs from the engine build, but I did install them on June of 2017 and although they don't have that many miles, they have years of sitting and very short runs. Also, when I removed the Edelbrock recommended Champion RC12YC plugs I installed Autolite 3924 plugs, as I have never been a fan of Champion. The problem really sounds like ignition to me.

I bought a new set of Autolite plugs and Mason installed them over at the body shop. I asked him if it started any better and he said the engine did not even turn a full revolution and it instantly started right up and ran perfectly. I looked at the plugs that were removed and they were extremely fuel fouled and smelled like hell 3 days after being removed.

No judgement on the engine until I can get it to where I am actually driving the car, not just starting it, moving it a few yards and shutting it back off. Worst thing you can do to an engine. After it is painted and the exterior parts are re-installed, I can start to drive it like a car again and see what happens with the plugs.
Top

One more minor setback. The car now has the door jambs, insides of the doors, underside and edges of the hood, engine compartment edges and hood lip, headlight wells and headlight buckets all painted and clear coated. The headlights are re-installed and adjusted, the doors are on and aligned and the underside of the hood is (was) installed.

After the hood was installed, Mason noticed the hood was moving around a small amount when it was opened and closed. At one point it rubbed the fender just enough to scratch the new paint on the side of the hood.

Upon investigation, he found that the asshole that installed the front fender aprons (in the wrong location, 3/4" to far back) also did not use any adhesive on the front portion of the aprons, allowing the front of the fender aprons to move ever so slightly when the hood was raised and lowered, but just enough to cause a problem this one time.

Now they don't move and the hood fits and operates perfectly.

Unfortunately, the side of the hood had to be repainted and clear coated before it could be re-installed, thus holding up the rest of the car from turning red.

Another small delay, but worth having the job done right the first time.

Stopped in at the paint shop today to check on something and found this in their outside area. Looks a lot like mine will look like when it is painted. 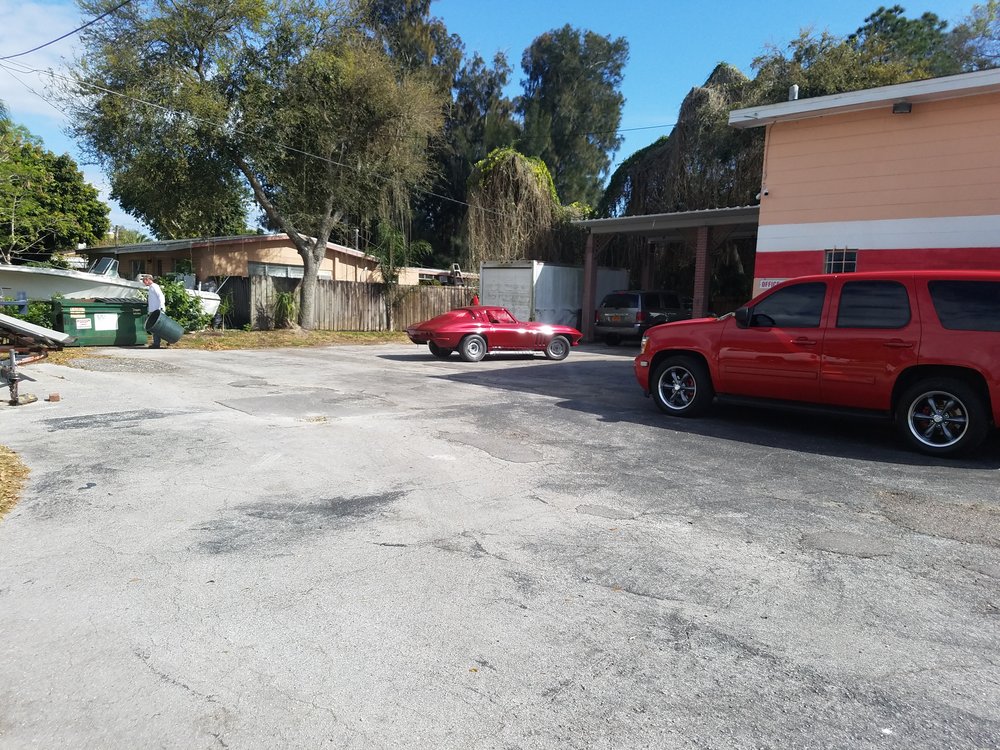 Upon getting closer, I discovered IT WAS MINE! My Corvette is finally RED.

Here are more photos. Remember, it was just painted and clear coated. The paint has not cured yet, and it has not been wet sanded, buffed and polished yet. 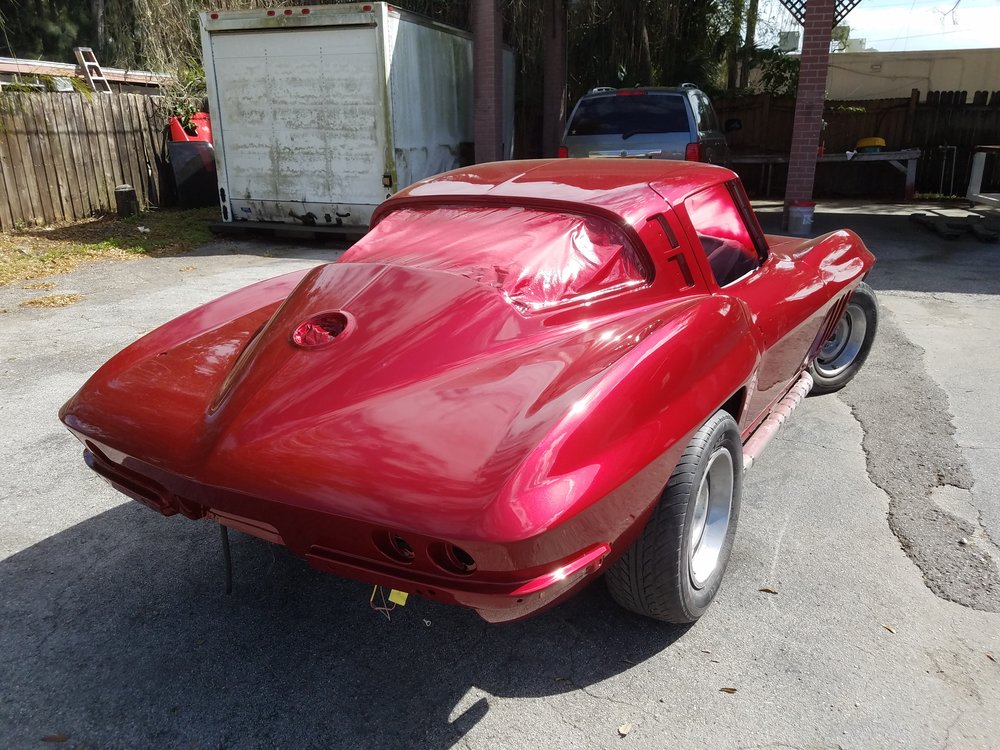 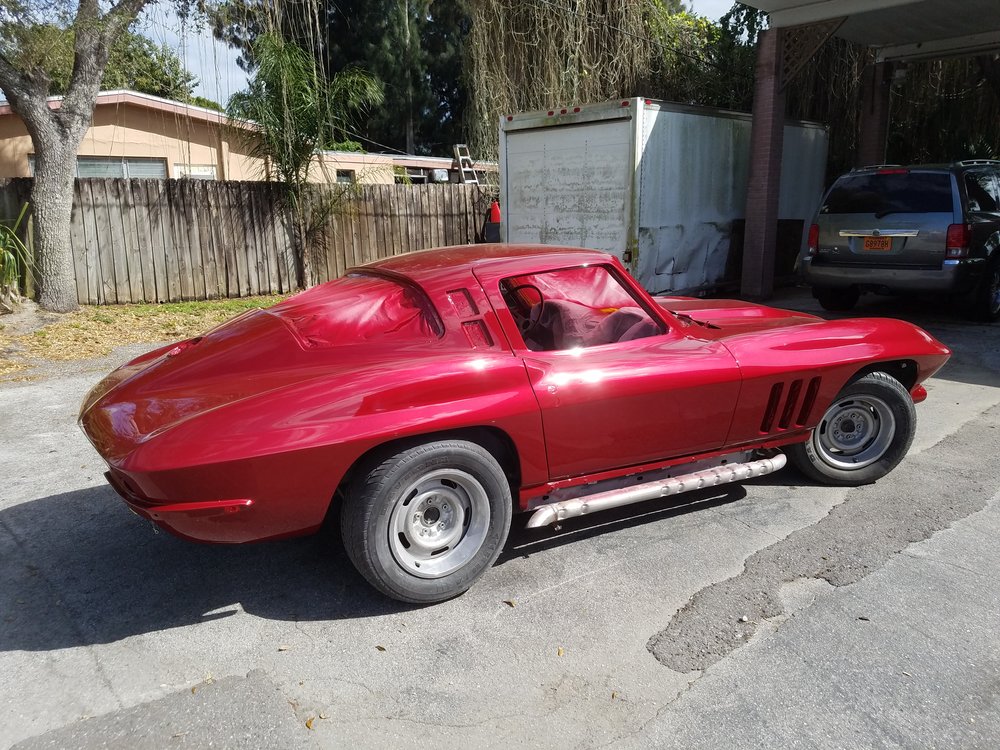 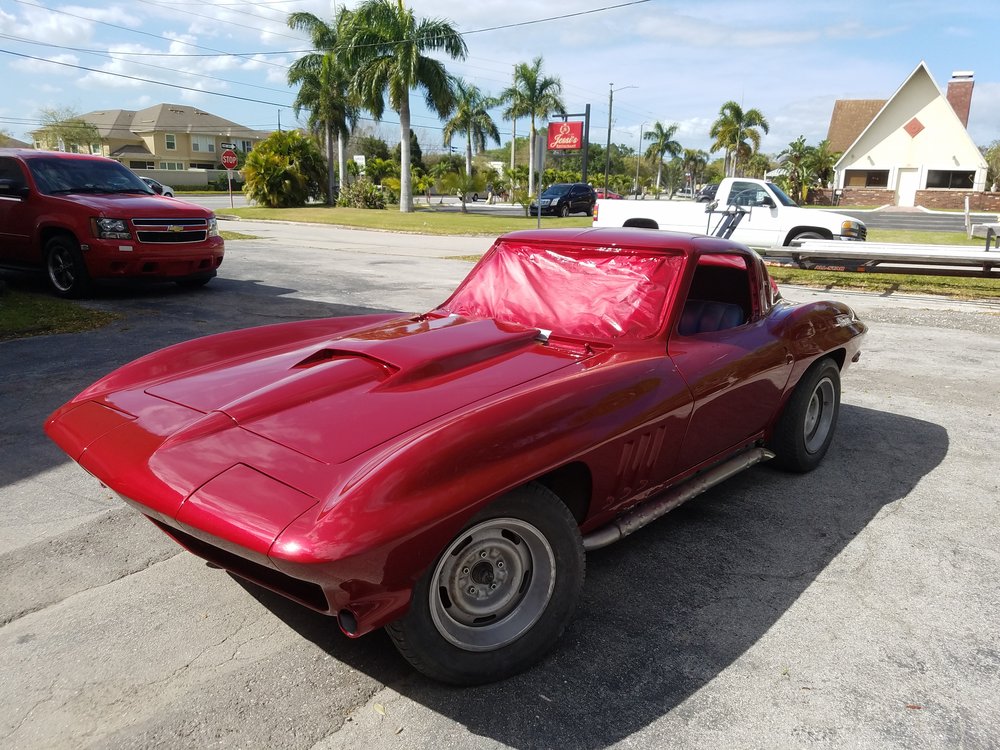 They still need to put the black hood stripe on it, and it needs to cure for about 4 weeks before they can start wet sanding. I can't wait to see it when all that is done. 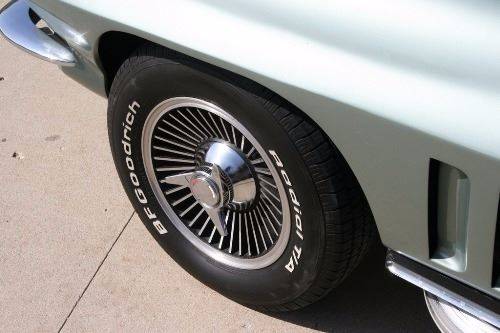 What a head turner with that color! I really like it

Got the hood stripe painted on and the car is now in the detail shop waiting it's turn to be wet sanded, buffed and polished. 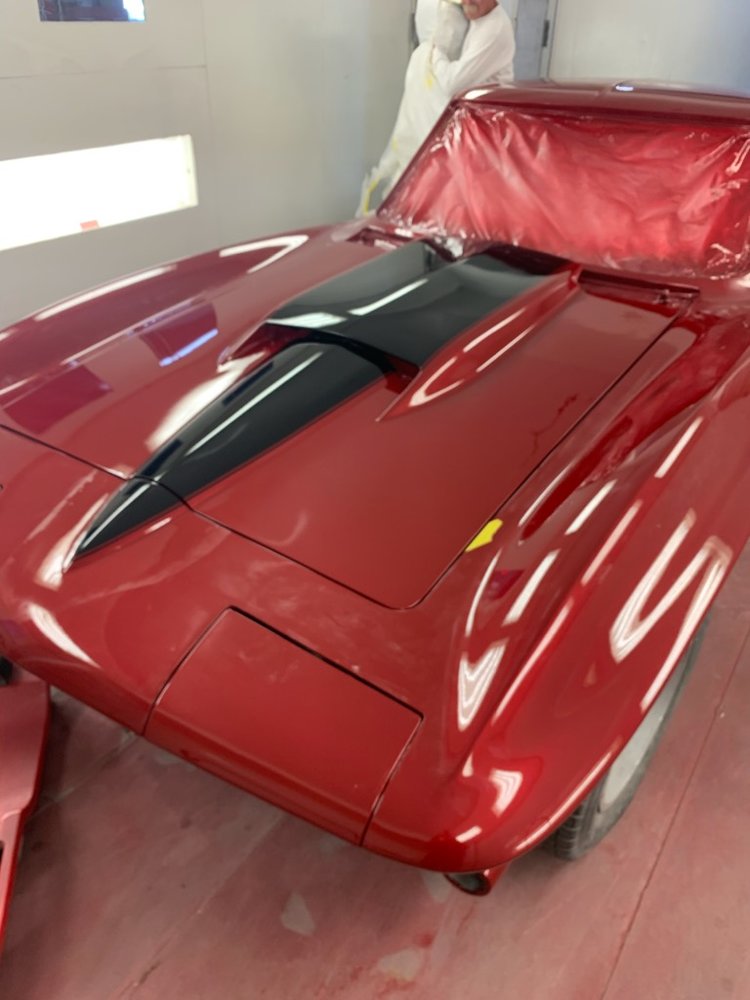 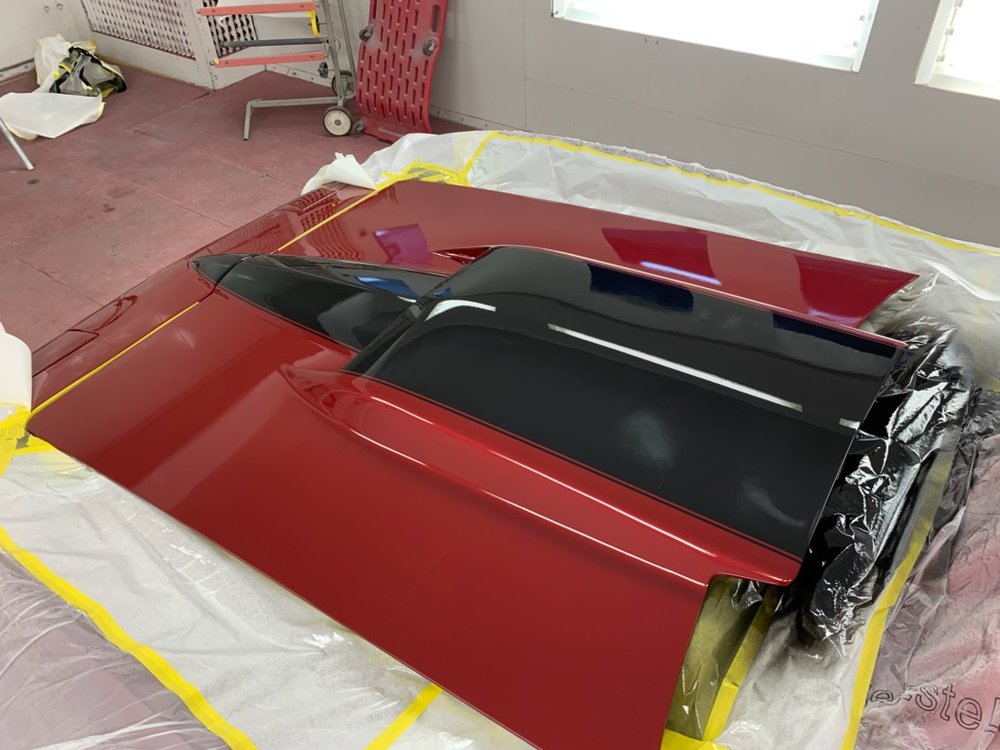 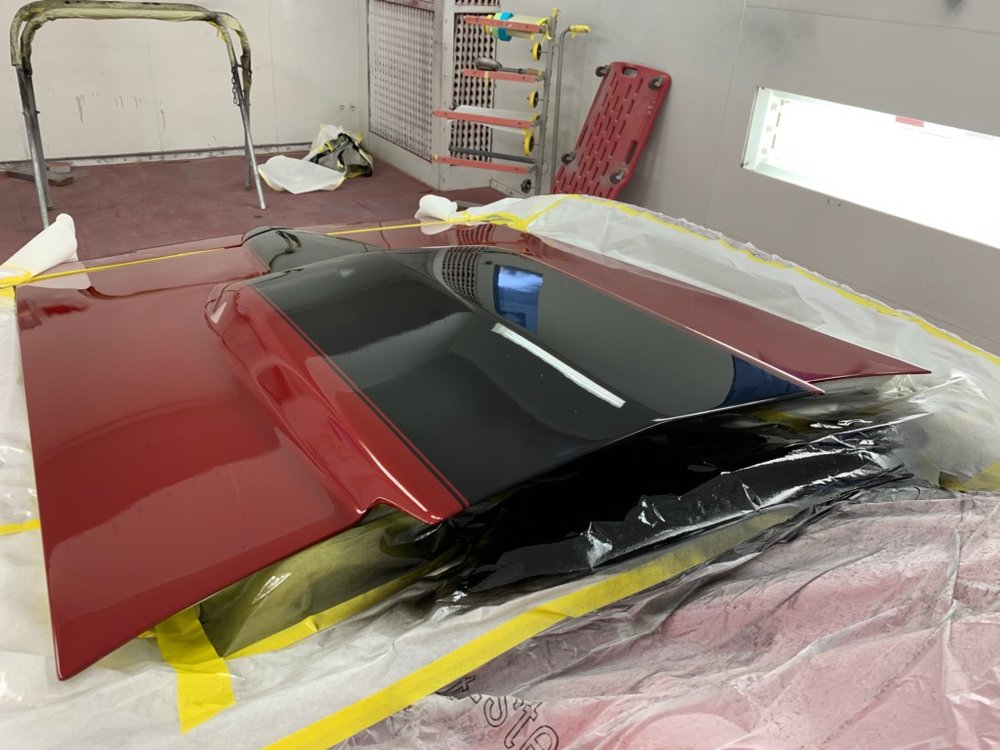 Mason has asked for all the weatherstrips, moldings, emblems and such to get ready for when it comes back from the detail shop, probably in a few weeks, as the paint still needs a few more weeks of curing.

If it looks this good now, can't wait to see it when it comes back!

Got a few photos of the car just before it was sent to the detail shop for wet sanding and final buffing. 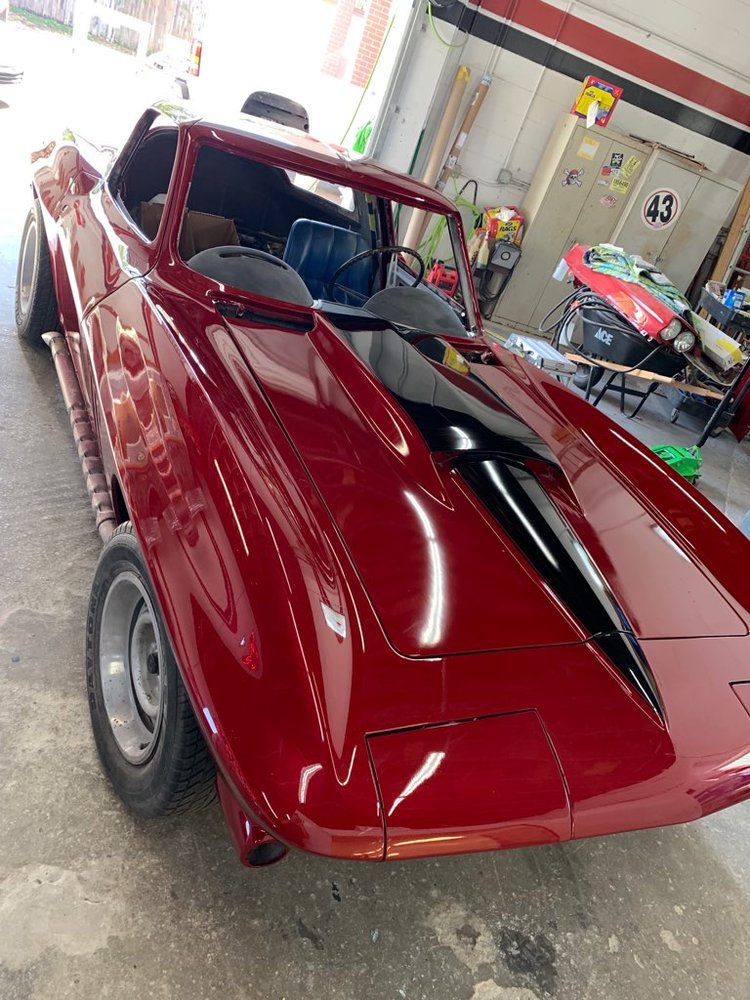 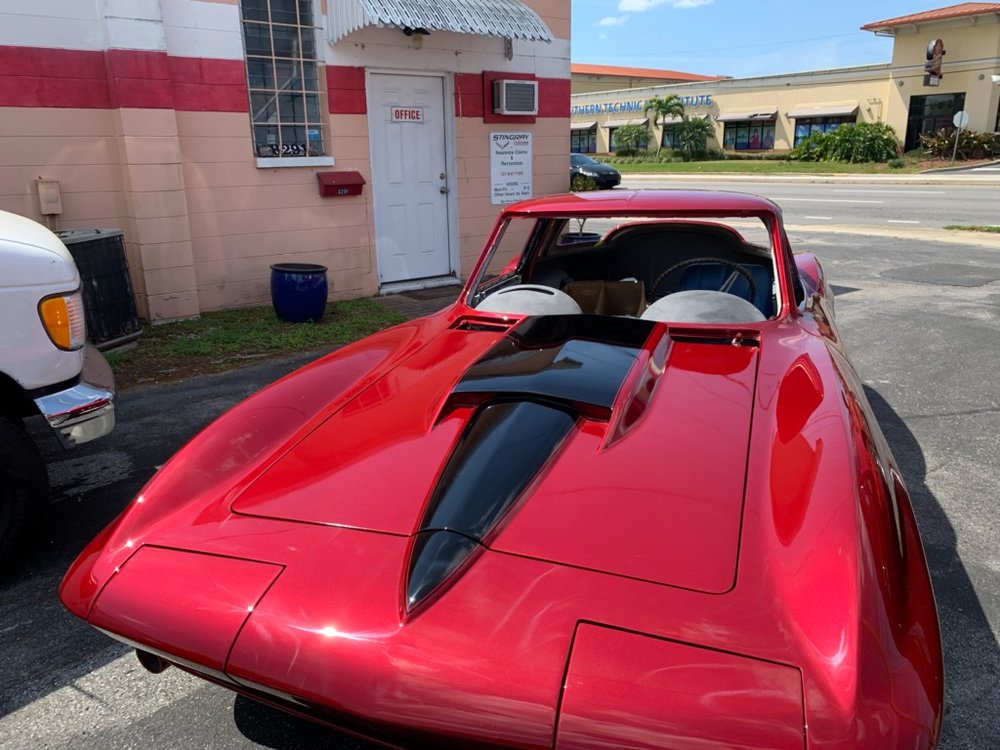 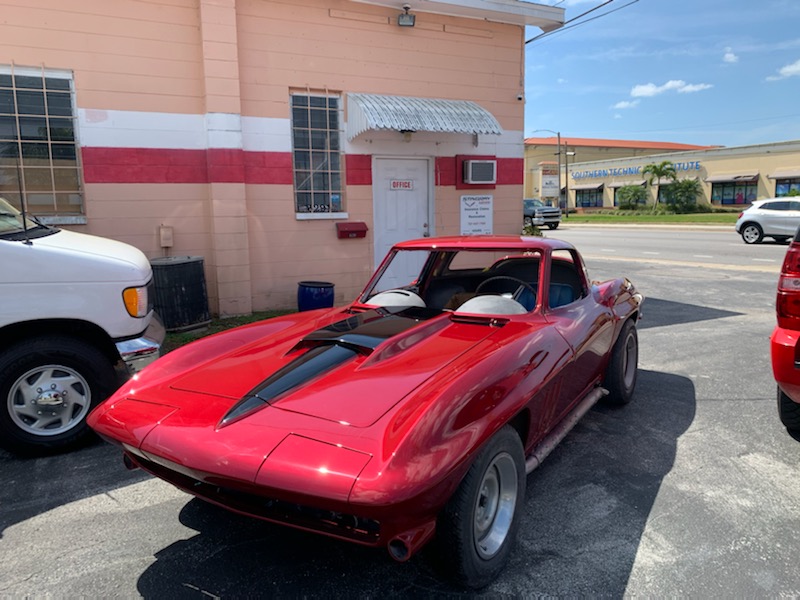 When it gets back, they will install the emblems, windshield and rear window. I'm taking the side windows and the rear window to have them tinted while they are still out of the car. I'm thinking it will be far easier to tint the rear window before it is installed instead of trying to get in the back of that car.
Top
Post Reply
1017 posts

Users browsing this forum: No registered users and 2 guests