Foot is doing much better now. I can walk on it without assistance and today, now that the incision is almost completely healed and the swelling has gone down quite a bit, I trashed that stupid boot and put my New Balance shoes back on. The boot was causing more pain and discomfort from no support than walking without it at all. Feels much better now. Even went back to work yesterday. Don't really need the money that bad, but it was really great getting out of the house. Can't really walk a lot yet, but at work I can sit at my desk and review construction plans instead of just lying on the couch watching TV all day .I was going stir crazy only looking at the living room, bedroom and bathroom all day. Nice change of pace. Think the wife's glad I am out as well!

Took some needed parts over to the body shop yesterday and saw the progress on the Corvette.

He has finished sanding the rear of the car and completed repairing the wave in the right rear quarter panel. Looks absolutely perfect. Apparently, the former owner had built a lot of body puddy up in that area so the door would match the fender, instead of aligning the door correctly. After removing all this body filler, he was able to re-shape the fender correctly and the wave was gone!

He now has all the gaskets and parts to put the door back on and align it with the rest of the body. Then he goes to the drivers side.

The roof vents and the last emblem should be here this week from Corvette Central so he can fit them up.

Very happy with the progress.

Well, the roof vents came and what a disappointment!

They said they were made of a softer metal so they could be shaped to fit the contour of the car roof if necessary, but boy did they overstate the meaning of slightly softer metal. More like play doe!

One was bent to hell and back, right in the box. The metal was so soft, you could easily re-bend it, but is is also so soft that after it is shaped, painted and installed, if someone touches it, it will bend back out of shape.

Called Corvette Central and let them know what a piece of crap they are selling. They get them from Long Island Corvettes, who usually has good stuff, but not these. They will take them back, but I have to pay for the return shipping.

Called a few other suppliers, and all that had them were the same ones from Long Island Corvettes.

I found that Ecklers now has a set for $80 less. I called them to find out who made them and they said a company here in Florida called Custom Casting and Chrome. I explained the situation and they are checking with the manufacturer to see what they are made of. If better steel, I will get them. If not, I will just have the body shop glass in the holes in the roof and eliminate the vents, since the drivers side is the only side that works. The passenger side is for show only and the drivers side is an exhaust for a vent fan I am not even using. 1966 Corvettes did eliminated them.

Should hear from Eckler's today so I can decide.

Other than that, the car is progressing much better than I had anticipated. Passenger door is back on and the weatherstrip that was not sealing now seals really well. He has recently got in a bit more insurance work, so I told him I didn't mind if he concentrate on the insurance work instead of my car, as he makes far more money on the insurance work. I have waited this long, a little more time is not going to hurt to get great job.

Posts: 489
Joined: Nov 16th, 2009 1:38 am
Tell us about your Corvette: 1971 Coupe that's been in the family since new. Was "stored" in a shed in New England for22 years. Even though I have limited knowledge and experience, I'm doing a body off restoration. Standby for many questions!
Location: Spokane, WA

It's always something, isn't it? At least progress is being made and it sounds like good progress to boot! I have a brother 8n Tampa, I'd love to see your cars when I get out that way again to visit...

Not much new on the Corvette, as the body shop has been closed for the Christmas/New Years holidays. Should re-open next week.

I did order the better vents from Eckler's and Corvette Central did accept the return of the lousy vents with a full refund without any questions. I did have to pay the return shipping, although I could probably protest due to the fact they arrived bent and therefore defective, but I was happy to get the $326 back.

Hope all had a great Christmas and will have a Happy New Year as well.
Top

Car is coming along at a steady pace. Passenger side is about finished and the door gaps are great. Rear section almost done as well.

Looks like we will be removing the windshield it took so long to install. Mason (the bodyman) is worried that with all the work done by him and Jamison's, the clips are no longer in the correct location for the molding to fit correctly. If he is worried, I am worried. So, he has a really great glass guy, and it looks like the windshield will be coming out and fitted up again.

Got a call from the body shop today, all the body shaping is complete on the '65 and it is in the spray booth for high build primer. All the lines are straight as new and the fender peaks are sharp as a knife. Looks a little odd now, like it has been painted in camo! 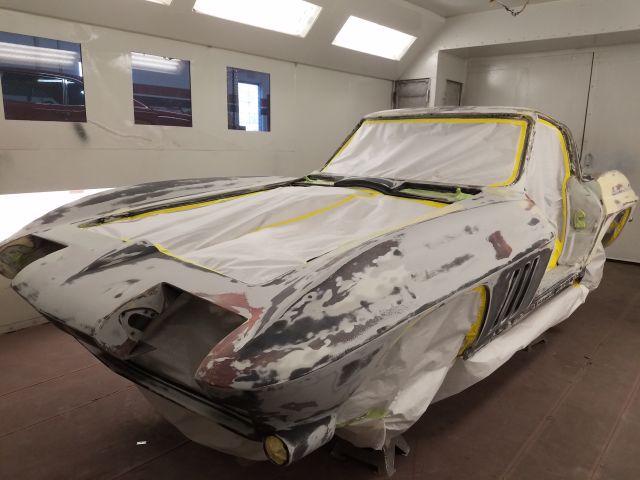 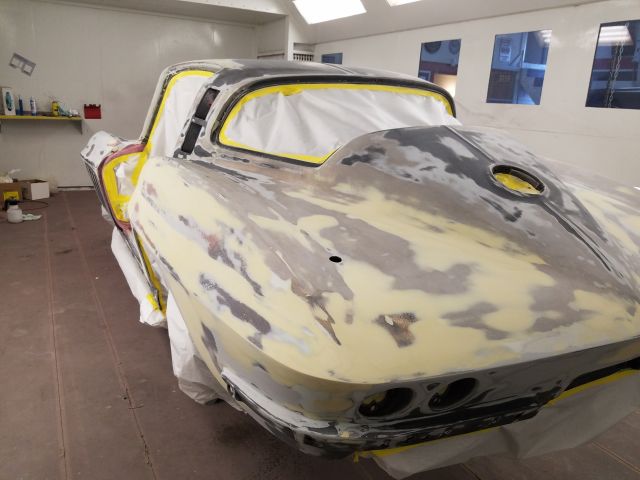 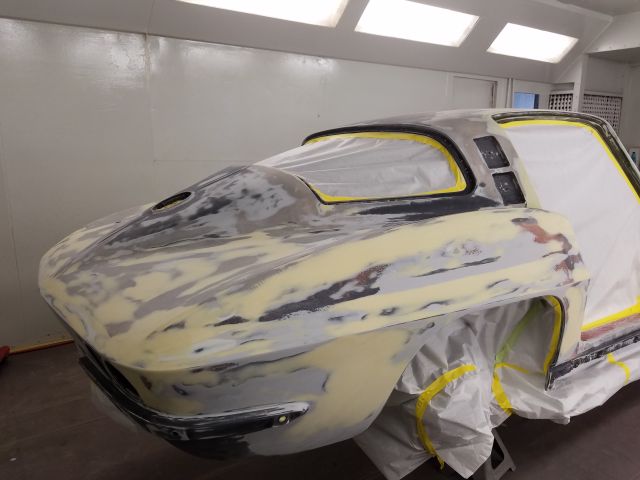 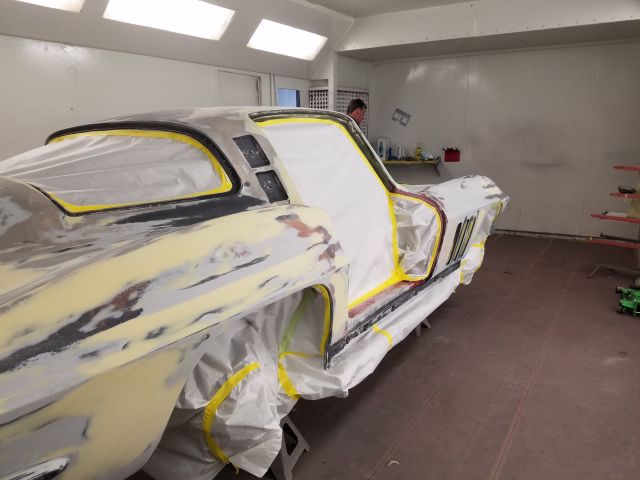 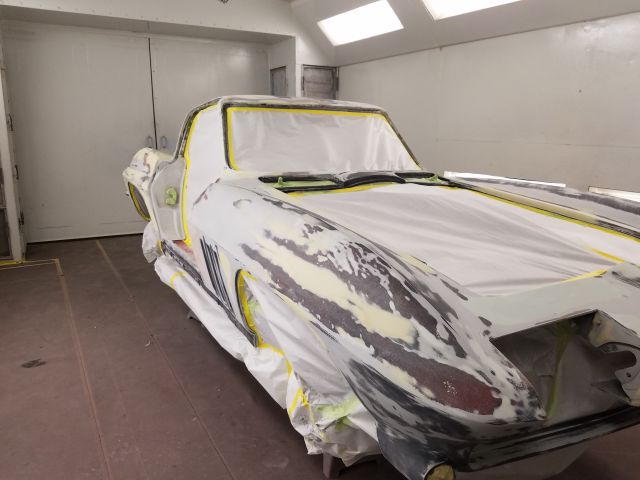 
Now after 4 coats of high build primer, it sure looks a little different. Any deep scratches and pinholes that were left in the fiberglass have now been filled and it is ready for final block sanding. The block sanding will also ensure all the lines, surfaces and curves have no very small high or low spots, all the fender peaks are straight and very sharp and there are no scratches which will show up in the final paint. 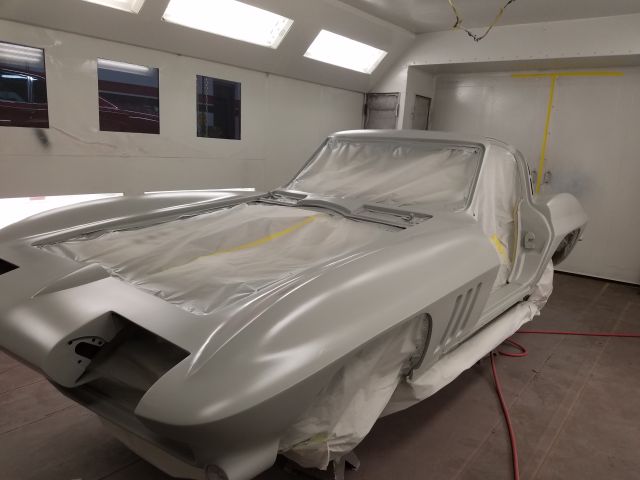 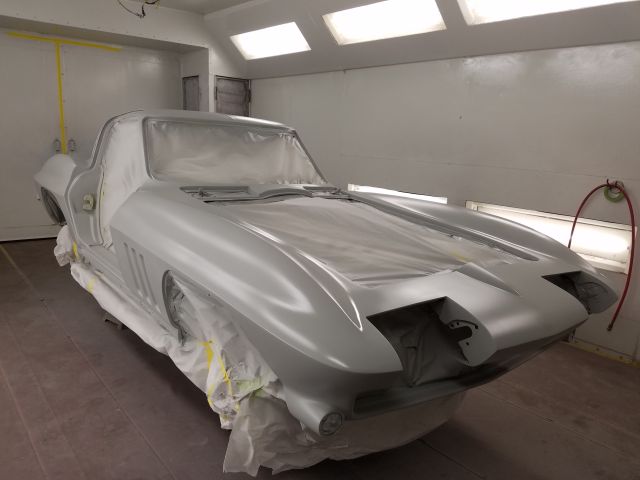 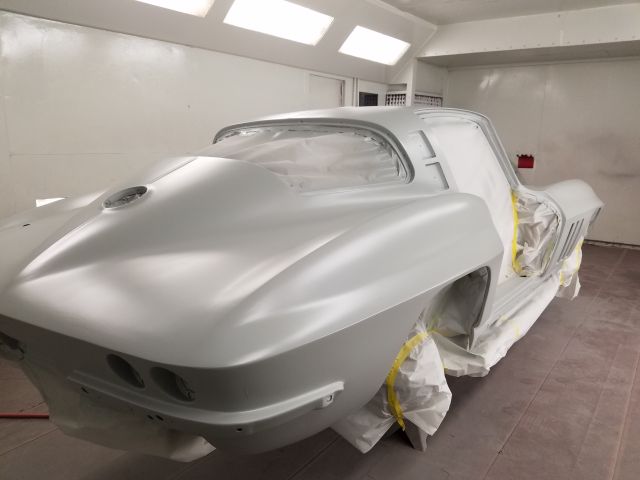 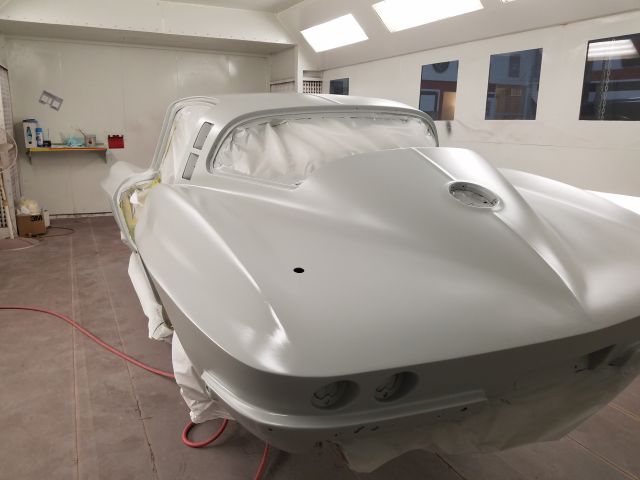 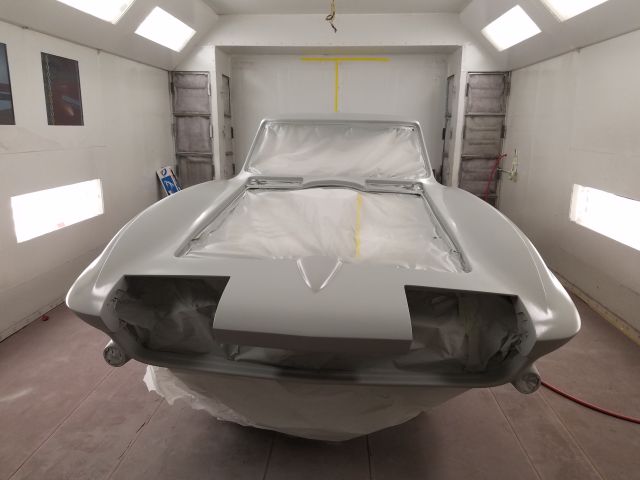 
The fiberglass just kept on soaking in the primer, which was why it took 4 coats. I'm sure a lot of it will be sanded off during the blocking phase. After that, the car goes back in the paint booth and comes out RED, at last! Body work looks fantastic. All door seams and hood lines and headlight buckets fit perfectly. Can't wait till it is red.

A few weeks gone past and a lot of progress at the paint shop. After applying almost 4 coats of Slick Sand High Build Primer, they started the lengthy process of block sanding, guide coating, more block sanding, expanding and filling any pin holes, even more guide coating, and final sanding with 220 paper. Now all that is done and the body looks fantastic. All panels are perfect, all lines are correct and all sharp edges are sharp, not rounded.

Last night I stopped over the shop just before our monthly Corvette Club meeting to check on the progress and got there just as it went back in the paint booth for the final priming. 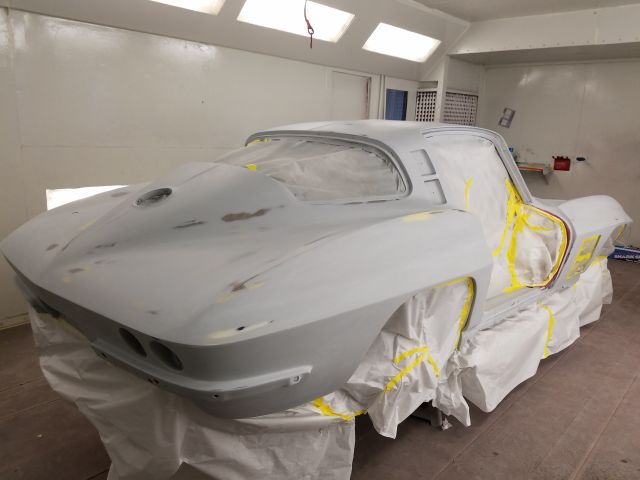 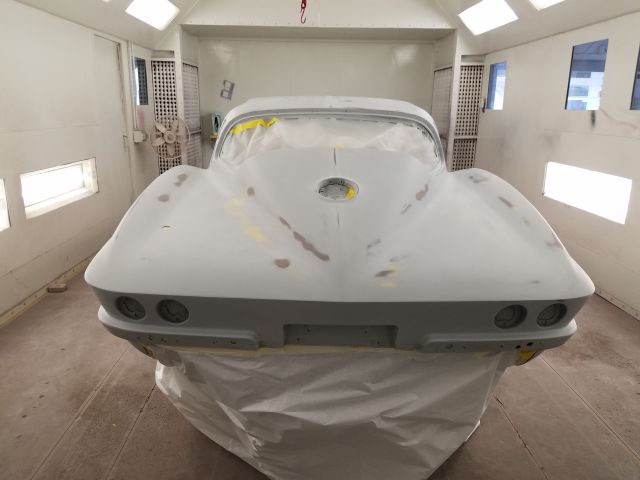 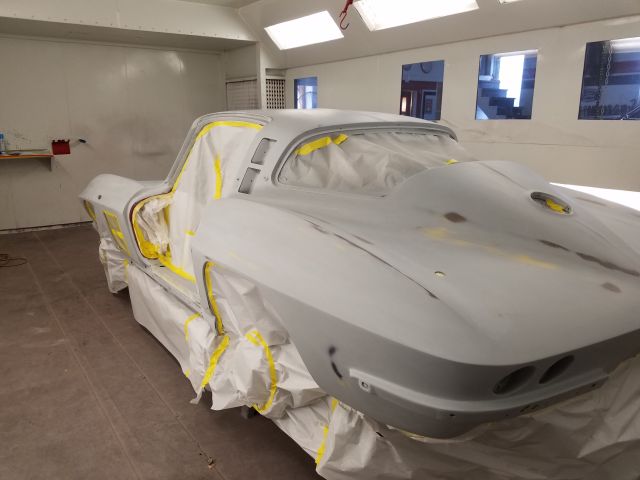 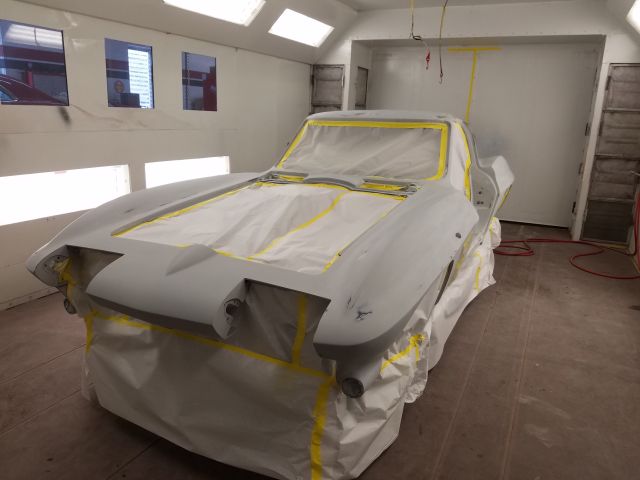 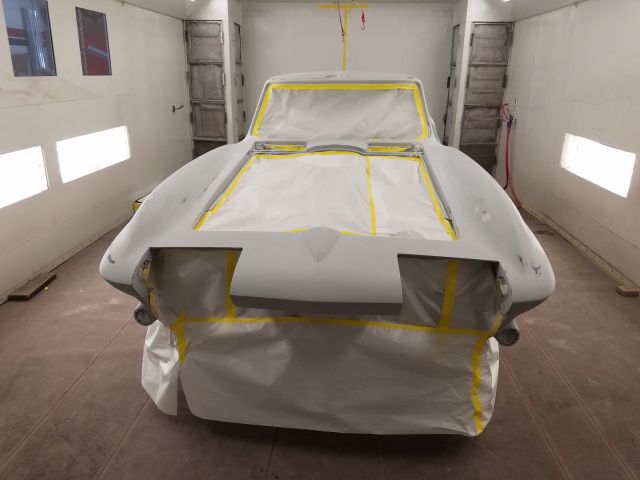 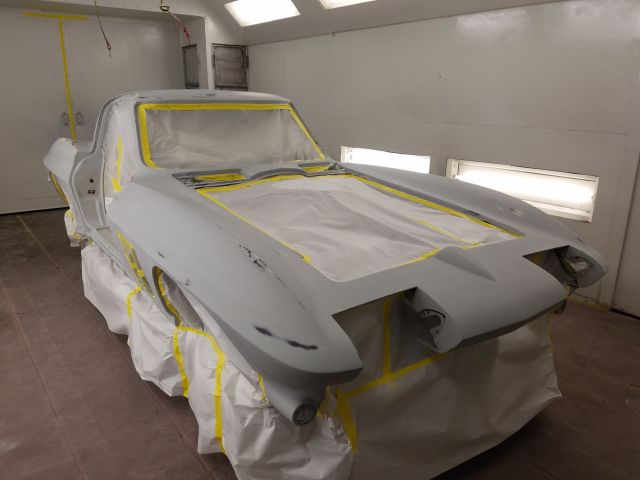 
The hood, doors and headlights still needed a slight bit of finalizing and then they were going in as well. 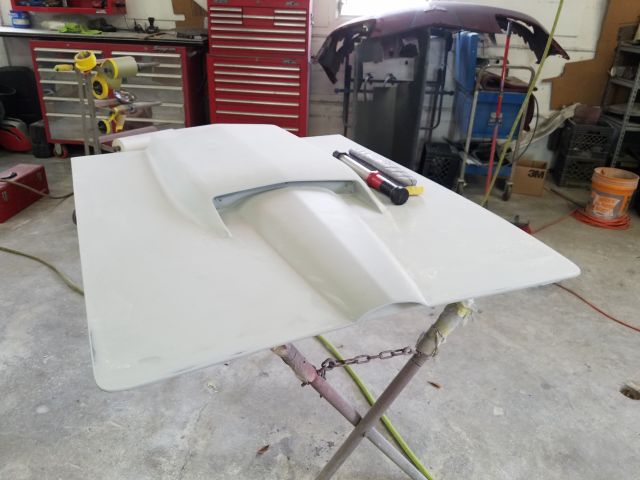 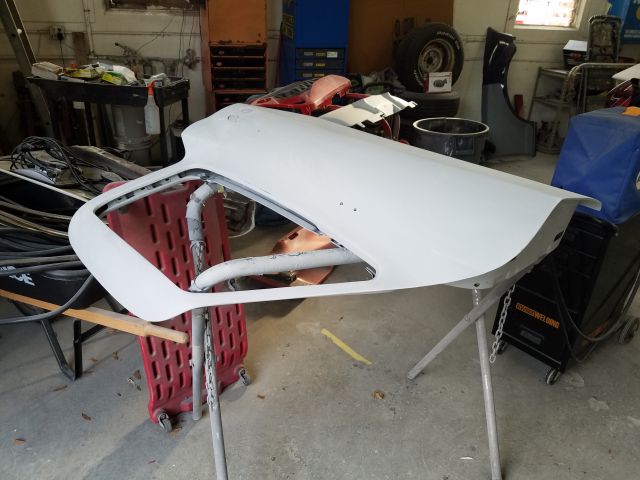 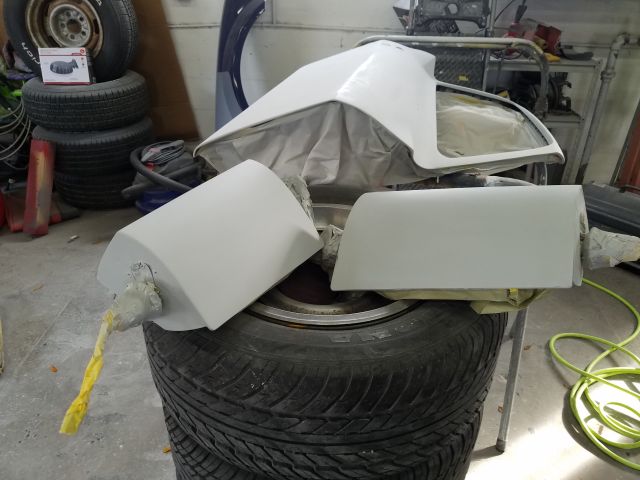 Target is still to be red and clear coated and polished out by the end of this month.

Getting more excited. Very pleased with his progress and workmanship.

Users browsing this forum: No registered users and 10 guests