Almost finished with the Lizardskin application. First 2 coats went on great! After letting it dry for several days, I will sand it a bit and apply the final thin coat to bring it up to the minimum required thickness. Will post photos then.

I received a call from Mason @ Stingray Auto Body and he is ready for my car!

I am scheduled to take it to his shop early next week. ANYTHING that is not done yet to get it painted I will have him do. That will mean I will only need to install the interior and it is DONE!!

Here is what it looks like now and what I hope it will look like when finished, except for the tires. I have black wall T/A Radials, same wheels. 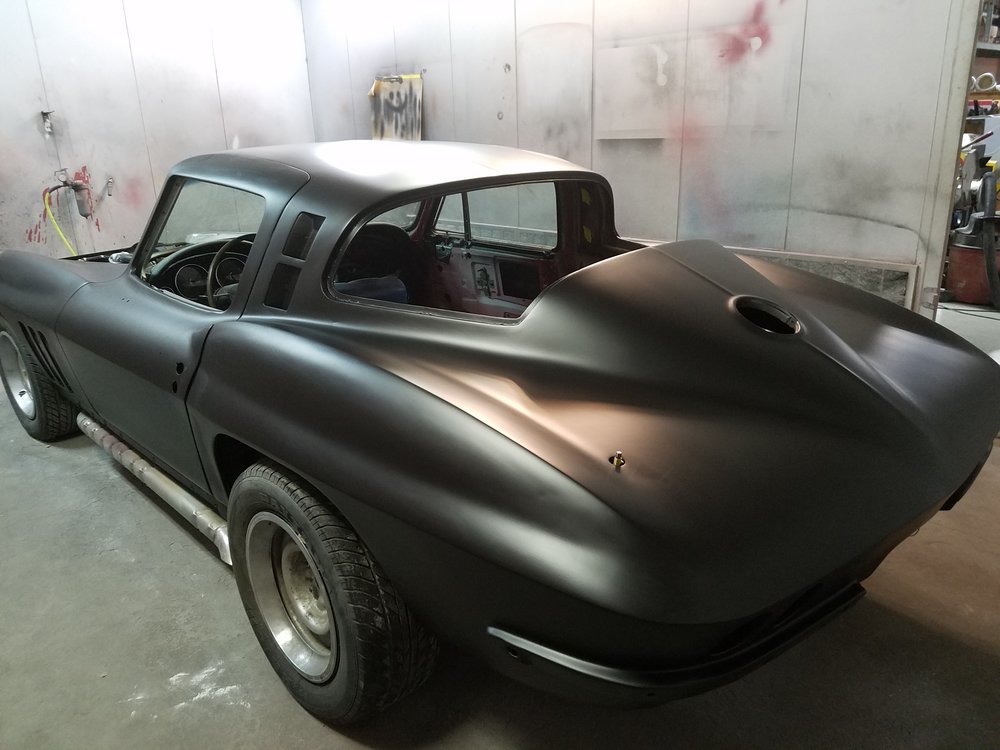 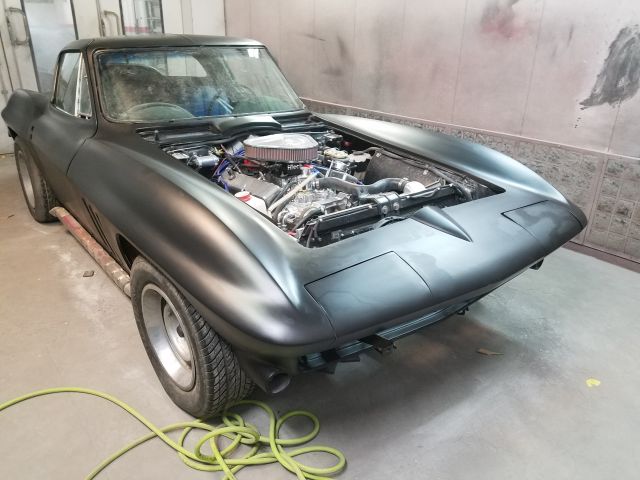 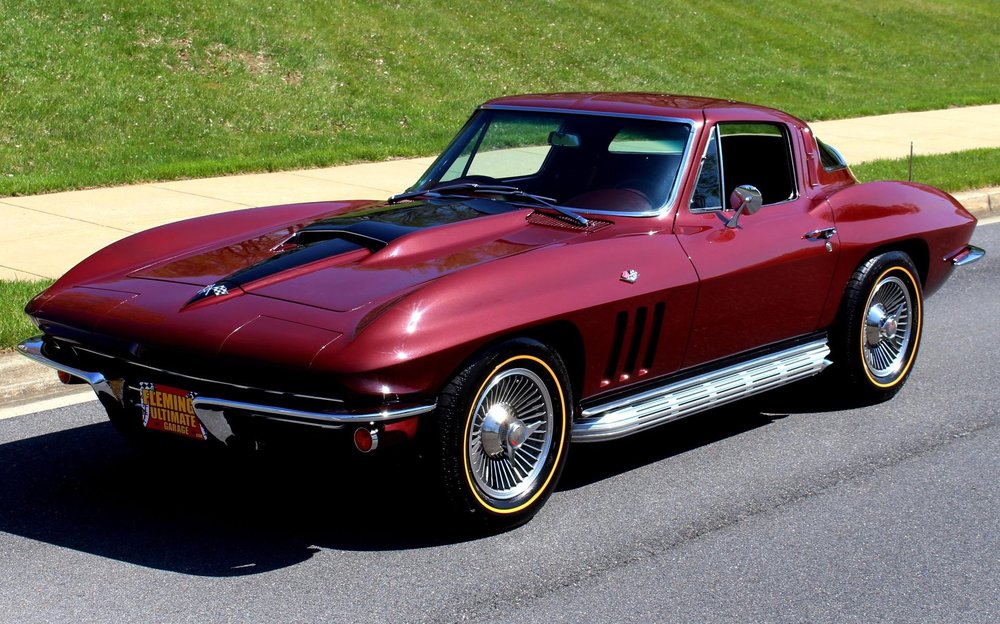 It goes in the paint shop on Tuesday, and I am getting more excited every day!

Another step closer to finishing.

I completed re-installing the Lizardskin on the underside of the hood with the new, fresh material. MUCH BETTER!

First I masked off the hood edges, then I covered the entire exterior to prevent any overspray of Lizardskin on the painted side. 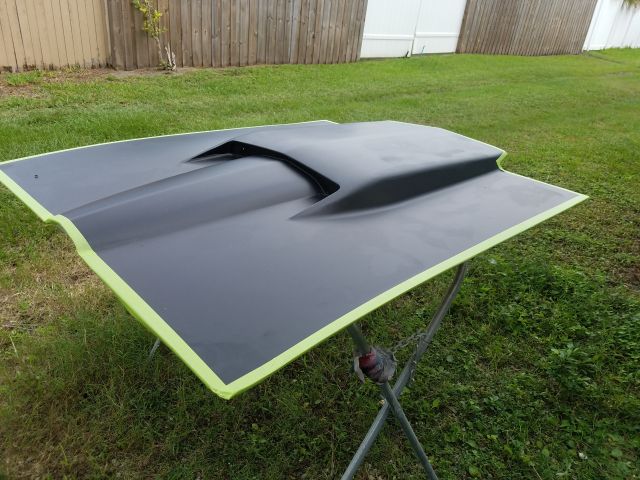 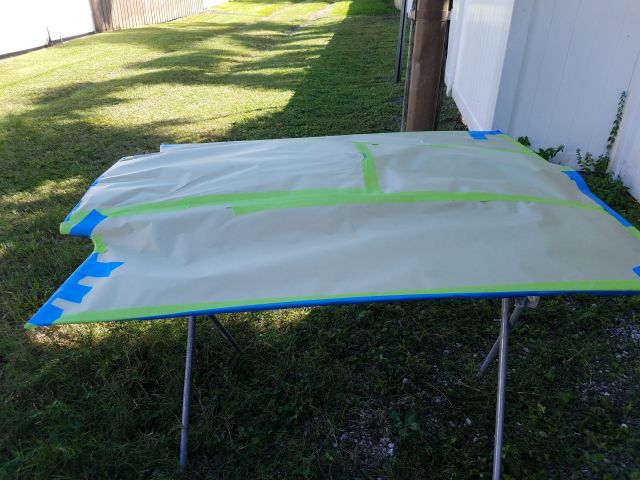 Then I masked off the underside outer edges and mounting surfaces, which I may paint the same red as the exterior. 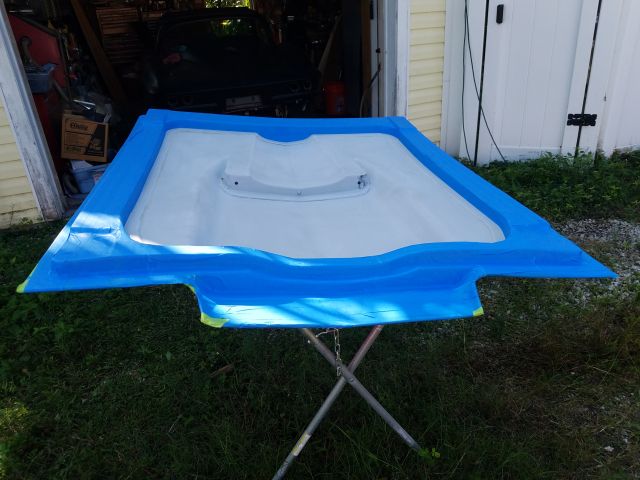 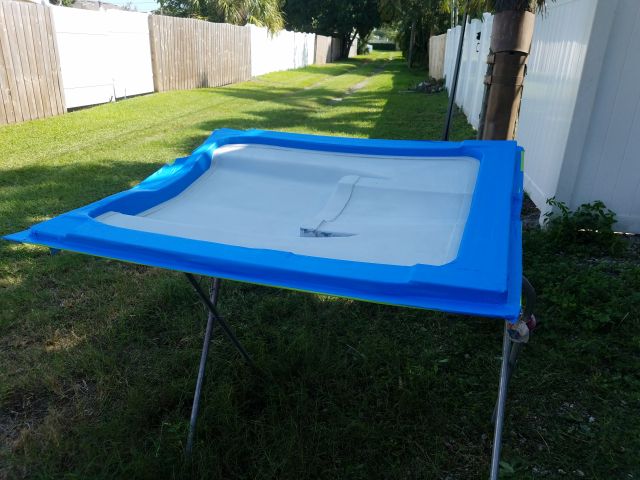 Then came spraying the Lizardskin. 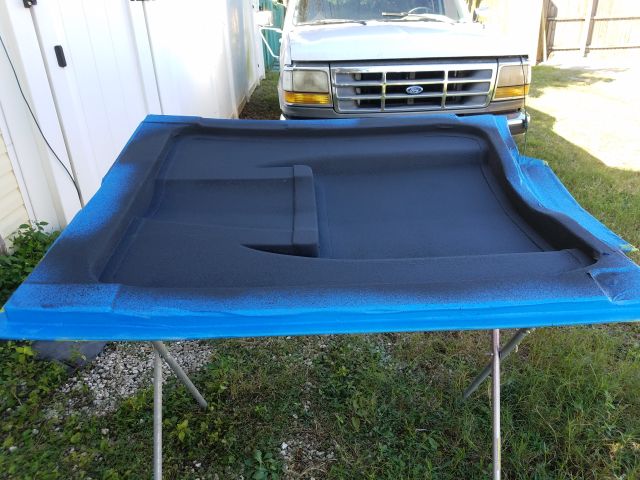 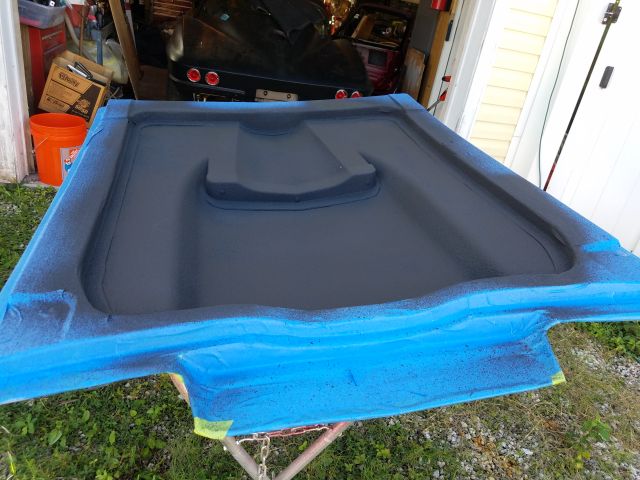 Removed all the masking and paper. 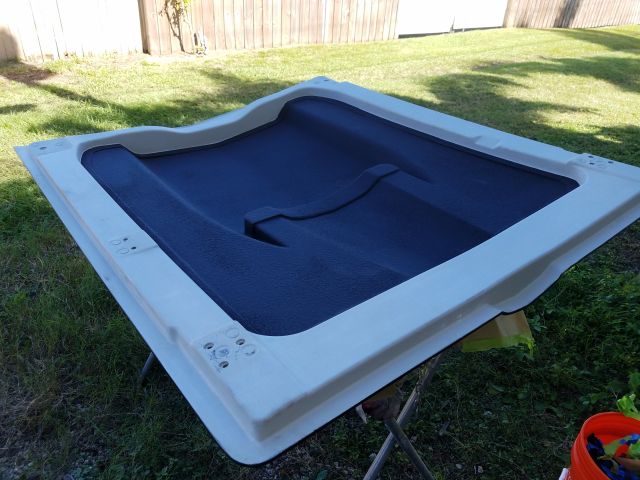 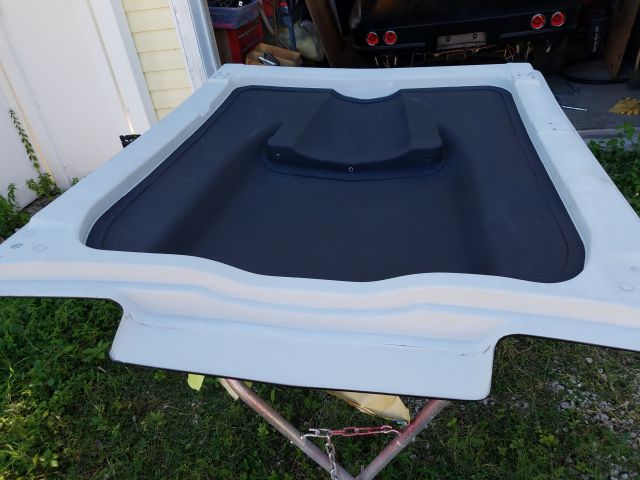 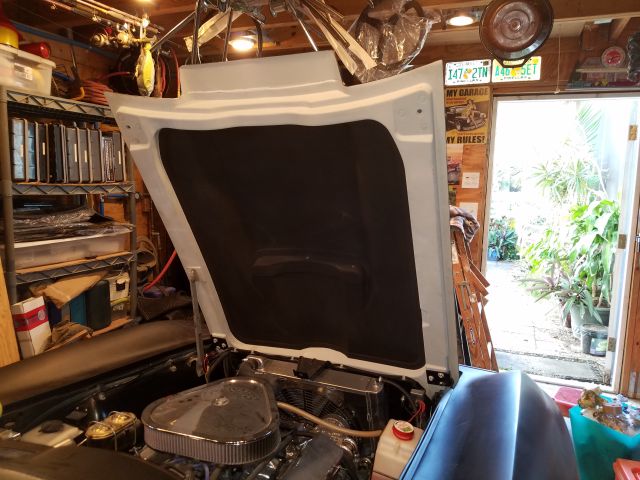 
I had to replace the battery today, as the one in the car finally gave up the ghost after almost 7 years. I installed a
new Optima glass mat battery. I have one in the 2001 and really like it. Everything else is about ready to drive it over to the paint shop right after work on Tuesday. Yeahhhhhhhhhhhhhhhhhh.

So, if I remember right, your hood was really hot with the bad application of LS already on it and you're hoping that a new correctly applied LS coating will reduce the temperature of the hood so the paint might hold up better. Now, I'm not a thermodynamics expert, but could the LS on the hood actually be keeping the heat in the engine bay and actually causing heat retention? Sort of like which came first, the chicken or the egg? Without the LS, the heat MIGHT be able to radiate through the hood and escape, but with the LS the heat might be retained and actually cause the excessively hot hood.

Did you try to see how hot the hood got when the LS was removed before you reapplied?

The actual sequence of events was 1) applied Lizardskin to help keep engine bay heat from the hood and harming the paint. 2) Due to it being too old, it did not cure. 3) Removed the bad Lizardskin. 4) Still had the condition about the high hood temperatures harming the paint as when the fans were not running I could not hold my hand on the outside of the hood without being burned. 5) Re-applied the Lizardskin from a fresh batch to the underside of the hood to again keep the engine bay temperatures from the hood. 6) Second application worked fine.

Many car manufacturers install insulation under their hoods for this reason. There are a few companies which make under hood insulation for the C2 Corvette, but only for the small block hood, not the big block scooped hoods.

I don't believe the Lizardskin is keeping the heat inside the engine bay because the problem was there and bad without the Lizardskin. I'm convinced the main reason for high heat in the engine bay is no air flow when the electric fans cycle and the high heat inside the engine compartment due to the headers. I ran the car in the garage for almost an hour today, out of the sun, with the hood closed, and I could not even feel any heat on the hood at all, so I now it is helping a lot. It was still really hot in the engine compartment though. I will probably need to wire the electric fan to run all the time if the heat looks like it will be affecting the engine compartment components, but either way, the paint will not be a worry.

I have some photos of a Lizardskin experiment I did in the past, I will find them and post them. They show a piece of metal which I covered half of with Lizardskin. I am holding the piece of metal by the covered portion and heating the exposed end with a torch until it is starting to turn red on the edges, and I could not even feel any heat where I was holding it.
Top

CORVETTE IS IN THE BODY/PAINT SHOP!

Glad to hear the car is at the painter's and thanks for the LS update/explanation.
Top

I see I failed to bring up something else I have going on. A week and a half ago I went in for foot surgery. I had been having a lot of problems with a nerve pain in my right ankle, and an MRI showed a cyst growing next to the nerve. The MRI was not an MRI with Definition, just a standard MRI of the specific location. An MRI with Definition would have show more. No matter, the results would have been the same, a mass next to the nerve. The surgery showed a soft mass about 3/4" in diameter like the MIR showed, but it was just over 2" in length and wrapped around the nerve. I went in for the surgery which went very well, but it was a lot more than we expected.

It was far more difficult to remove than the doctor had thought. Instead of a 2" incision, I needed a 5" incision so he could unwind it from around the nerve without hurting the surrounding muscle, tendons, blood vessels and such. I left with everything out, but with a 5" incision stapled back together. I hurt like hell for the past week and a half. Every time I moved the ankle it felt like cat claws grabbing the skin, but it was healing.

The wound healed very nicely thanks to the excellent job the doctor did with the staples, anti-biotics and really great pain pills!!

Well, today it was healed well enough to have the staples removed, and while it still aches quite a bit, the sharp pain I would get from trying to walk with crutches is gone, but all the redness is not gone as well. I am hoping to be back on my feet at least, in a couple of days.

I have not seen what progress has been made on the '65 Corvette yet, I am hoping to feel well enough by tomorrow or Wednesday to go over and check. Will post more when I find out.
Last edited by rbryce1 on Nov 28th, 2019 3:50 pm, edited 1 time in total.
Top

OUCH! Hope the healing continues and enjoy the holidays.
Top

It's been a few days now and I can finally walk without crutches, but not for long and very carefully. The wound has healed very well, but still needs attention. No pain, but a sort of partial numbness in the bottom of my foot. That is gradually going away, but still feels weird.

Stopped by the Corvette shop a 2 days after getting the staples removed and was happy with the progress so far. All of the corrections on the Passenger side from the door back have been pretty much addressed, but he had to order some more door shims to get the door to align. Hasn't done the alignment yet, but hopefully has the parts. The door shims I gave him that came with the car were, once again, not Corvette door shims, they only had 2 slots, not 3. Wonder what kind of car they came on? Just another on the list of junk parts the previous owner provided.

Corvette Central also started their holiday free shipping and I ordered the set of 4 roof vents, as we decided the ones that came on the car were too far gone to restore, even at $350/set they were far cheaper to replace with new than to try and fix.

Well, that's all for now, going to Thanksgiving dinner with the wife. Hope all of my friends on this forum have a happy Thanksgiving as well.
Top
Post Reply
1018 posts

Users browsing this forum: No registered users and 6 guests